A Secretary is not a toy: Hillary’s reality show

The “was she or wasn’t she?” second-guessing of Hillary Clinton’s Benghazi testimony speaks volumes about the way in which we’ve come to view all politics as performance. More disturbingly, though, it lays bare the extent to which we expect women to put on a show, and the zeal with which we then revile them for doing it. Not only in politics, but in certain other areas as well. Areas like 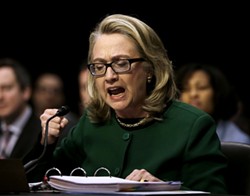 We’ll get to that in a minute. But first, what really happened? Were Hillary’s tears for the dead, and her flash of table-pounding anger, simply preplanned bits of melodrama designed to get her out of a tight spot? I’m going to say “nah” – and not because I think members of the President’s cabinet are above such subterfuge. And it isn’t because I think Hillary herself is a 100 percent genuine individual who’s incapable of trying to pull a fast one on the public. The record is too clear for that.

I say “nope” for a few reasons, the first being that she’s simply not that good an actor. Ever since she left the First Ladyship and entered politics for real, it’s been striking how stiff a presence she’s mostly remained. All of that expensive polling and focus testing, all of that (one assumes) professional image coaching – and still, the moments in which she didn’t seem distressingly robotic can be counted on one hand.

There was the memorable “That hurts my feelings” line in the 2008 debates, which brought a touch of self-aware levity to what was becoming a nasty primary. And in the same year, Hillary’s appearance alongside her SNL impersonator, Amy Poehler, allowed her to display some bona fide comic timing (which, you’ll notice, is something the President uses to appear perpetually earnest). Other than that, Ms. Clinton’s public persona has mostly been two steps above Nurse Ratched’s on the “folksy spontaneity” scale.

So yeah, I do think her emotions of this week were real, partially because they were so convincing. Maybe it’s just wishful thinking on my part: I don’t want to live in a world where the outgoing Secretary of State is a better actor than Anne Hathaway, or even Tara Reid. But there’s a second reason I’m giving her the benefit of the doubt, and it has to do with self-respect and responsibility to one’s gender. Simply put, I don’t believe for a minute that Hillary Clinton would humiliate herself by feigning tears just to make the mean old senators stop picking on her. I don’t think she’d allow herself to send a signal to the women of this country that no, girls can’t really play in the big sandbox after all – and she sure couldn’t live with herself if she did. Not if I understand one-tenth of what makes her tick.

This is where the double standard comes in. John Boehner can blubber like a baby at the drop of a hat, and no mainstream pundit questions his aides’ explanation that he’s just a man of deep and sincere emotion. Nobody suggests it might be an act (or, even likelier, the logical outcome of ’round-the-clock  Miller Time). They certainly don’t suggest it might make him unfit for office.

Yet the right wing couldn’t wait to pounce on Hillary’s tears and (even more aggravating to their ongoing case of butthurt) her brazen backtalk. To be sure, they were doing it to neutralize a likely 2016 foe. But the reason they knew just how to do it is that they were following a centuries-old playbook that has allowed men to disdain women’s emotions even while questioning them.

In that regard, Sen. Ron Johnson was the most daring of Hillary’s accusers. In alleging that she had planned ahead of time to “describe emotionally the four dead Americans

as her trump card to get out of the questions,” he managed to combine two seemingly contradictory misogynist stereotypes: the unmanageable hysteric and the cold, calculating bitch.

“It was a good way of getting out of really having to respond to me,” he whimpered, inadvertently and ironically echoing complaints women have been voicing about their uncommunicative husbands and boyfriends since long before Oprah got a network. Yes, ladies, this Johnson just wants to relate.

That this is bad strategy for a party that’s been turning away female voters in disgusted droves is too obvious a point to go out on. In a weird way, it’s also the sort of clumsy bullying a Candidate Clinton could only hope for. Like a lot of progressives, I have distinctly mixed feelings about the woman. At times, those feelings have even come close to contempt – like when she lied about having come under sniper fire in Bosnia, or when she responded to the question “Do you think Senator Obama is a Muslim?” with a craven “I don’t know.” After witnessing her treatment on Capitol Hill and in the press last Wednesday, I found myself wishing the 2016 election could be moved up to next Tuesday.

If she does want to win that contest (and I know few sane folks who think she doesn’t), she still has some image work to do. The “that hurts my feelings” comment was a winner because it managed to be both knowingly snarky and disarmingly cute, all at once. There’s nothing wrong with admitting that, when applied in the right doses, funny and cuddly just work -- for politicians of either gender, but especially female ones, and especially female ones of a certain age. With her bona fides as a cool and capable customer already firmly established, appealing now and then to Americans’ feelings of protectiveness toward an ersatz Grandma could be a simply devastating political weapon.  But so are honest tears, and genuine, righteous anger, and every other emotion she’s earned the right to display in public without immediately provoking the most cynical suspicion.

So get mad, Hillary. And cry when you think we all should cry. And laugh when you’re delighted, and dance, and do everything else that Elizabeth Warren knows real people do. (Speaking of which, have you started thinking about running mates yet?)

You don’t have to be half a person to land that big promotion, Madame Secretary. You can have it all. And when you have it all, so do we.