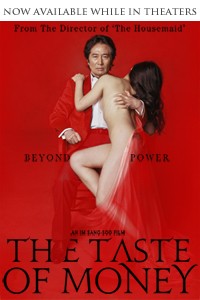 After the unprecedented crossover success of Psy's hit single Gangnam Style -- about the horse-dancing absurdities of the rich in South Korea -- Im Sang-soo's follow-up to 2010's The Housemaid would seem to be coming along at the right time. Set in the same luxuriously moneyed world as The Housemaid, The Taste of Money is a more serious, high-gloss-finish take on the absurdities of the very rich that starts on a different path than Gangnam Style but ultimately spins into the same kind out-of-control parody. No matter the country, wherever you find money, you will also find sex and power. Almost to flaunt it, the film begins in the Baek family vault, where Yoon (Baek Yoon-sik) and his bodyguard Young-jak (Kim Kang-woo) are filling suitcases with cash to get Yoon's son, Chul (On Joo-wan), out of jail. It's not bail, it's a bribe, a time-honored Baek family tradition it would seem. Chul, in his mid-20s now, is a rising star in the company founded by his grandfather, which Yoon currently runs but is losing interest in. Not shockingly, Yoon's interest was always purely int the money and the power, not the family business he married into. And the sex, of course, but not with his aging wife, Geum-ok (Yoon Yeo-jeong). When Yoon goes too far, though, and seduces the Filipino housekeeper, Eva (Maui Taylor), promising her a life together with her children, Geum-ok discovers his secret and takes her revenge, seducing Young-jak.

The Taste of Money is a somewhat twisted sequel in that it really isn't a sequel. Im calls it a spiritual sequel, but only the children, Nami (Kim Hyo-jin) and Chul , now grown, seem to carryover from The Housemaid, and aside from a few vague references that Nami makes relating to the fiery climax of The Housemaid, very little of the story carries over. They would be better described as parallel films, like a comic book alternate universe, where Nami and Chul are the parallel conduits to different stories. While the Korean actors are all well cast, Darcy Paquet as the American business man that Chul is trying to woo for a big and highly immoral and probably illegal deal, is a serious weak link in the film. Paquet is an American journalist and translator who runs KoreanFilm.org. I've interviewed him for articles in the past and hold him in such high regard that it pains me to say that he is the weak link in the film. He's far from the only weak link in the film -- Maui Taylor is equally hard to bear in the film, and for the same reason: neither have an actor's voice, and something as simple as that is often the downfall of actors. It's not the downfall of the film, it just pegs it back a few notches from what it could have been. It's a bit of a tough film to digest though, on an empathy level especially. It's hard to find anyone to root for, let alone empathize with. Nami and Eva work to an extent, but only to an extent. It's a cold and calculating thriller though, and on that level it works with extreme efficiency and skill. Empathy would likely just ruin it. http://www.youtube.com/watch?v=GdWNcdm0u9w Out today from the following outlets: SundanceNOW, Bright House onDemand, iTunes, Amazon, PS3, XBOX, Google PLAY and YouTube.