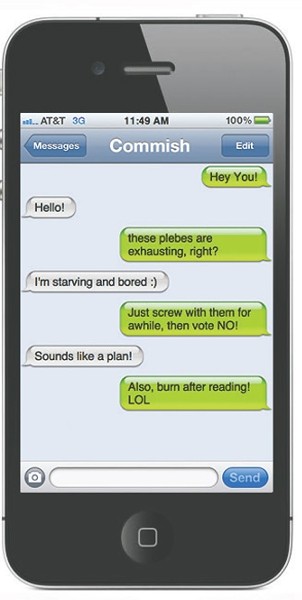 So, today's been a busy day for transparency and potential litigation, right? First came the news yesterday that teacher and "citizen" (and possible and former political candidate) Sean Ashby would pull the lever today and file a request for State Attorney Jeff Ashton to petition the Florida Department of Law Enforcement to basically do it's job: Independently investigate the shenanigans that Orange County pulled off in LOLTEXTGATE. Well, Ashby did file said complaint this morning:

This letter is to serve as an official complaint and request for a criminal investigation into members of the Orange County Board of County Commissioners.

As a citizen of Orange County, I am requesting an investigation to include but not be limited to the following:

-       Whether the Orange County Board of County Commissioners on or about September 11,  2012 violated Florida Statute 286.001(2) and  Orange County Charter Article II Section 209, by BCC members receiving public input during a properly scheduled meeting, and such input not being placed within the official meeting minutes.

And, boom! Just like that, Ashton admitted to David Damron over at the Orlando Sentinel that he had already talked with the state authorities on Jan. 17, so, uh, shit's about to hit the fan? (This almost quells the notion that nobody had filed a complaint before Ashby; Ashton had gone on record with the newspaper indicating it was unlikely he would do any digging; what the fuck happened?) Regardless, Orange County Mayor Teresa Jacobs issued the following statement via her office late this afternoon, basically speaking in the code reserved for people who are both concerned and passive aggressive at the same time.

“The public deserves and expects a transparent Orange County government. The FDLE inquiry requested by the State Attorney should provide an independent review of the facts and I will do whatever I can to help expedite this process," she wrote. OK, so now she wants an independent review after previously asserting that one was not necessary? Whatever, says Citizens for a Greater Orange County spokeswoman Stephanie Porta (also of Organize Now!).

"It's not government of, by and for corporate lobbyists and it's not government in the sunshine except when it's embarrassing to politicians," said Stephanie Porta of Organize Now. "Over fifty thousand Orange County voters were silenced in September when lobbyists and commissioners colluded to keep Earned Sick Time off the ballot and we have a right to know why."