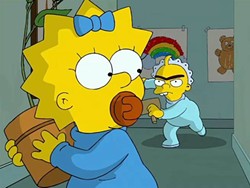 I didn't quite binge watch House of Cards like some people did, watching all 13 episodes over the first weekend. It took me the whole week, mostly because I couldn't get as into the hard, centralized plot that drove the story. To me, the Underwood's machinations weren't nearly interesting enough to carry roughly 13 hours of story. When the show stepped back from it, especially in chapters 7 and 8, the show really took off for me. Those were downright great episodes of television, and they spent little time with the talking to the camera gimmick, or, honestly, any real plot. Corey Stoll's scenes with Kristen Connolly in Philly, and Spacey's scenes with his old barbershop quartet were especially great ones. But episode 9 went right back to the gimmicks and plot and all but begged the viewer to compare the show directly to The West Wing. But the show was a success in my eyes because I'll most likely watch the second season and that's the most important benchmark in my eyes. Award shows continue this weekend in the run up to the Oscars, and you can follow the biggest one, the BAFTAs, as they are announced on IndieWire. News, links, etc: -The full Vanity Fair profile of Anapurna Pictures' Megan Ellison is online. It's worth a read. (VF) -This is really cool: color photographs from the sets of black and white films. (Criterion) -The thing about being made fun of in a review by Rex Reed is that it's Rex Reed, so who gives a shit? Melissa McCarthy shouldn't. (NextFilm) -A Q&A with Wong Kar Wai as he premiers The Grandmaster in Berlin. (THR) -Here is a teasing tweet from LAIKA (makers of ParaNorman and Coraline) about upcoming projects. (@laikahouse) -And confirmation of their next project. (AICN)

-Pablo Larrain's Oscar nommed film, No, about the media effort to take down Pinochet, is causing a bit of a furor in Chile -- especially from the actual people behind the No campaign. (NY Times) -The Pixar film that was tentatively titled "Insides a Young Girl's Mind" finally has a real title, Inside Out. It's going to be directed by Pete Docter. (Upcoming Pixar) -Look for Richard Linklatter's Before Midnight sometime in June or July. (@ECRboxoffice) -And look for Woody Allen's new film, Blue Jasmine, sometime in August. (@ERCboxoffice) -Catching up with John Kahrs, director of Paperman. (NY Times) -Tati is coming back to the Criterion Collection. (CriterionCast) Short films: -The Oscar nommed Adam and Dog, by Minkyu Lee with a bit of a boost from Disney Animation legend Glen Keane. Looks very Disney ready in a lot of areas to me. (15:02) (Cartoon Brew) -Another Oscar nommed animated short, Head Over Heels, by Adam Reikert. It's very clever, I liked it a lot. (10:26) (Cartoon Brew) -And to round out the animated shorts category, Maggie Simpson in The Longest Daycare. (4:25) (MetaTube)

-Six hours before the big Adventures of Pete & Pete reunion... (5:25) (Funny or Die) Feature film: -The Pirate Bay: Away From the Keyboard, in case you were curious about their backstory and legal fight. (YouTube) Trailers, posters, etc: -A new trailer for Wong Kar Wai's The Gransmaster, which is finally finally for really real coming out soon "thanks" to The Weinstein Company. (Probably not in Orlando.) (Playlist) -Room 237, about the making of Stanley Kubrick's The Shining. Out on iTunes on March 29th. (Apple)

-David Mamet's Phil Spector, with a crazy-haired Al Pacino. He should do more work with HBO, it's the only things he's really been good in over the last decade. I watched The Insider this week and desperately miss the Good Al Pacino. (THR) -A clip from Noah Baumbach's Frances Ha, hopefully a comeback for both Baumbach (after Greenberg, which I liked but was in the minority) and Gerwig (whose Lola Versus was a truly awful film if only for containing the line "what, you never just wash your vagina?"). (Criterion Cast)