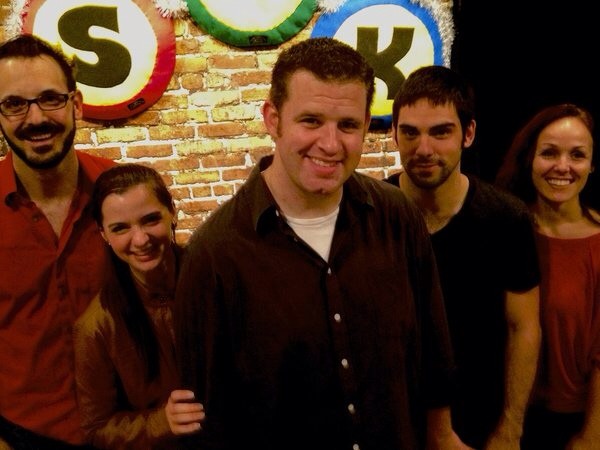 After getting the business of introducing the characters out of the way last month, the second episode dives right in with a night of hijinks at the bar Todd (Mike Carr) manages. Todd is still stuck on his couch, stewing about his recent relationship breakup, so we follow his new roommate Raymond (Will Hagaman) in his ill-fated attempt to score with a pair of bar patrons at the urging of Jeff (Chris Dinger). Meanwhile, waitress Sarah (Ana Eligio) wants her prospective manager Jocelyn (Jennifer Bonner) to like her new song demo. In classic slamming-door farce fashion, the characters all collide in Todd's apartment with comic results.

The performance started on a shaky note with repeated prop mishaps (well handled but still distracting) and some fumbled dialogue cues, but caught fire in the second half. Guest star Jessi Riese made a strong impression as Dorothy (a barely-veiled carictature of a certain local "nerdy burlesque" impresaria) who offers to show Raymond her "sonic screwdriver." Bonner's character is still the most inconsistently written, but the actress got to exhibit her exceptional spit-take skills not once but thrice. Suggestive without getting gratuitously smutty, the sexual slapstick built to an obvious but entertaining climax worthy of Abbot and Costello.

Episode 2 was a notable upgrade over the original episode, and co-author Kimbro assures me that Todd will finally get off his couch and take command as the show's protagonist next month. The third episode debuts on March 1st and you can catch up on the pilot via Vimeo.