Watch that, man: Reading too much into Bowie

Okay, he hasn’t actually said that. But it’s what’s being inferred by people who make it their business to overthink his motives while underthinking his music. And would they steer us wrong?

Last week, the excitement over Bowie’s unexpected comeback reached a fever pitch when his first album in a decade, The Next Day, was made available as a free stream on iTunes. (It’s available for purchase March 12.)  Concurrently, producer Tony Visconti was all over the press, recounting how their creative team had kept word of Bowie’s return a complete and utter secret until the last minute – even from the artist’s own label executives and P.R. people.

Journalists remarked that Bowie’s rejection of a “slow build,” market-saturation promotional strategy was highly unorthodox – particularly for a cyber-visionary who had just a few years ago championed the use of the Internet as a fan-networking tool. If Bowie was going in the other direction, these expert tea-leaf-readers assumed, then so must the industry be – and maybe even society itself. Constant contact was out; the mystique of inaccessibility was in.

Even the DISQUS set agreed that, yes, a brave new world of reticence must be at hand. “More time spent on writing songs, less time on Twitter & Facebook. That is my advice to new bands,” one “Adam” chimed in on Rolling Stone.

Hold on there, Sam Donaldson. It really shouldn’t be necessary to point out that “new bands” don’t enjoy the flexibility a Bowie does. For the up-and-comers in pop – and in any art form, really – time spent on social networks is now a necessary supplement to, not a replacement for, time spent slaving away on the actual product. How many struggling creators could employ a strategy of CIA-like secrecy to anything but the most self-defeating effect? You can’t build a mystique around something people haven’t yet experienced. There is no demand without supply, or at least the promise of it.

(And that doesn’t apply only to the young unknowns: Blue Oyster Cult, for instance, have been away from recording for two years longer than Bowie was, yet if they suddenly released a new disc they had recorded “in secret,” the response would be knee-slapping incredulity. A secret from whom, pray tell? Christopher Walken and Will Ferrell, maybe?)

Hint: This is not a "persona."

It’s understandable that some would still ascribe willful paradigm shifting to everything Bowie does. In his ’70s heyday, calculated heraldry was practically his GNP. Now, decades past Ziggy and the Thin White Duke, he can’t change his shoes without someone commenting on his “new persona.” (We’ve further devalued this idea by assigning it to dim clotheshorses like Madonna, who only ever had one persona, and never demonstrated the ability to come up with a full two.) But the Year of the Diamond Dogs was a long time ago, and Bowie is now a 66-year old who doesn’t have to do anything to get our attention—and that includes doing nothing. Even his abrupt, thief-in-the-night reemergence into the pop marketplace doesn’t really qualify as a publicity stunt, simply because that marketplace has essentially vanished. Bowie will sell just as many albums by keeping mum as he would have by spilling his guts on late-night TV for the past three months. Which is as many albums as 99 percent of all acts sell nowadays, which is next to none. (The album itself revels in that implied freedom, Bowie exuding the relief of a man who doesn’t have to throw out his back reaching for a brass ring that long ago rolled away and got crushed under the merry-go-’round.)

When you know what you don’t have to do, you can figure out what you don’t want to do. Maybe Bowie is having his producer do his interviews not because he’s trying to further some sort of Greta Garbo pose, but simply because he doesn’t feel like it. I wouldn’t blame him. It would have to be dispiriting in the extreme to lead a game of catch-up with some 20-year-old freelancebot from Rolling Stone who doesn’t know who Earl Slick is, let alone Bertolt Brecht. (It probably wasn’t much fun dealing with the freelancebots of the ‘70s either, but if they didn’t know who Brecht was, they at least they had the sense to pretend they did.) Hell, if I were advising Bowie, at this point, I wouldn’t even want him talking to me. 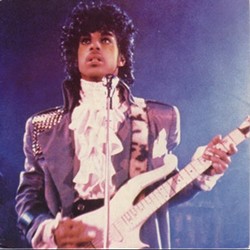 Still doesn't know what to make of the abacus.

Yet the belief remains that David Bowie is talking to us even when he ain’t talking -- that his every decision should be taken as a didactic measure aimed at upping the quality of life of aging droogies everywhere. There’s a wide chasm of difference, though, between an inspiration and a template. And I’d be very surprised to find out that Bowie has even a vestigial interest in serving as the latter. That’s the province of jackasses like Prince, who a few years ago renounced his own endeavors in online outreach – and couldn’t resist urging the world at large to follow suit.

“[A]ll these computers and digital gadgets are no good. They just fill your head with numbers and that can't be good for you,” he opined, exhibiting his customary pinpoint intellectual focus. (As I recall, this epiphany coincided exactly with a big contract he had signed to disseminate his music via that most wholesome of communications platforms, the U.K. Sunday press.)

Whatever oversimplified computer dystopia Prince saw, I doubt it’s the world David Bowie sees. Not for “new bands,” not for wannabe fashion designers, and not for people who simply want to play Words With Friends with their cousin in Des Moines and don’t have to worry about Fleet Street tumbling to their secret recording sessions. Thinking that Bowie wants or needs to lead us off that path of digital interaction and back to “authenticity” is pretty ridiculous on its face (and pretty ironic, given our aforementioned tendency to still view him as the King of Artifice).

Maybe we just want to be a part of a movement, even when the evidence that we aren’t is right there in front of us. For example, the rationale for changing your online avatar to a Mad Men-like caricature is to feel at one with that program’s aesthetic. But when Bowie offered a similar customization tool keyed to the cover art for his new record, the inevitable byproduct was giddy separation. The reason was simple: Not one of us possesses a mug shot as iconic as Bowie’s Heroes portrait to literally deface.

Celebrities: They aren’t “just like us.” I’m head over heels about The Next Day -- the album and the anti-marketing campaign – but I don’t see much of myself in it, and that’s a good thing. I sure don’t hear it as some clarion call to change my life, my professional strategies or my leisure habits.

As Bowie once sang, “It’s got nothing to do with you, if one can grasp it.” And I think I can grasp it. I may even tweet about it.