Ugh, day light savings time, I hate you so much. I feel completely out of sorts for the entire day every time you happen. I feel like today is a wasted day even though that's irrational.  Anyway, it's another week and another slate of film festivals to talk about. I'm at neither one of them but Twitter is as good a surrogate experience as the real experience, right? And no waiting on lines in the rain. The SxSW festival is just getting underway this weekend, with premieres of films from Andrew Bujalski, Joe Swanberg and Brian Poyser (and some non-mumblecore directors too), while the Miami International Film Festival wrapped up this weekend and announced its winners. SxSW is infinitely the more interesting festival, especially since its such a VOD heavy festival (meaning most of these films will end up on some sort of VOD platform before the end of the year). Shane Carruth's Upstream Color is the most anticipated film coming out of the festival for me. It's been almost a decade since Carruth debuted with the time traveller Primer, and we're getting really close to a release now. The bad news is that it won't play Orlando theatrically, but the good news is that it hits DVD, Bluray and VOD on May 7th, so it's not that tough a wait. News, links, etc: -The Flaming Lips' Wayne Coyne has gone way past the idea of being weird in an interesting way, now it's just weird for weird's sake with the album they released as part of a box of chocolate earlier this year and now this vertical-frame documentary called A Year in the Life of Wayne's Phone. (AV Club)

-This is a great piece on Ghibli director Goro Miyazaki and the fortunate/unfortunate aspect of having a legend for a father. (LA Times) -And more about Miyazaki's From up on Poppy Hill from the other coast. (NY Times) -More than 50 films that played SxSW last year are available online in some form. (CriticWire) -Lucasfilm to Disney: how the deal went down. (Bloomberg) -Meet the London man behind the fake Michael Haneke twitter account. (The Guardian) -How is Netflix making any money spending more than $4m an episode on their original content like House of Cards and Hemlock Grove? (Deadline) -Somehow someone found a new angle on the Beatles to make a film about, called Good Ol' Freda, and they even got four Beatles songs licensed to them for it. (Playlist) -Some storyboards from Park Chan-wook's Stoker. (NY Times) -Danny Boyle on the Olympics opening ceremony and his upcoming film, Trance. (The Guardian) -Superman III and Clooney's Batman cowl? Come on, you couldn't do better than that WB? (THR)

-That third term for Michael Bloomberg probably wasn't such a hot idea. (AV Club) -Stanley Kubrick on his favorite -- and least favorite -- part of filmmaking. (Cinephile Archive) -Behind the scenes of Blade Runner. (Kino Images) -Michael Rougier's photo of Jayne Mansfield and Mickey Hargitay after being rescued from their overturned boat. (Life) -The first image of Cate Blanchette and Sally Hawkins in Woody Allen's Blue Jasmine. (/Film) Feature film: -The hour long Rolling Stones tour documentary, Tip of the Tongue. (Rolling Stones) Short films: -A Cinephile's Labyrinth, wherein Michel Gondry takes us on a tour of his favorite video store. (Nowness) -Life on Mars, a 30 second retro infomercial for the exciting new developments on the Red Planet, by Lukas Vojir. (i09) Trailers, posters, etc: -Downloaded, a doc about Napster directed by Bill S. Preston, Esq, premieres at SxSW this weekend. (LA Times) -So does Hours, a Hurricane Katrina drama with Paul Walker and Geni Rodriquez, directed by Eric Heisserer. (SxSW) -The first trailer for Sofia Coppola's The Bling Ring, starring Emma Watson. (THR) 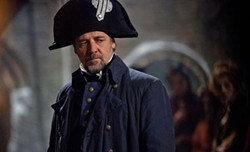 -Dear Mr. Watterson, wherein fans talk about Calvin and Hobbes but does not score an interview with Watterson himself. (Vimeo) -What Maisie Knew, with Julianne Moore and Steve Coogan about an aging rock star trying to get custody of her kid. (First Showing) -John Milius is one crazy son of a bitch, but it's surely a crazy worthy of a documentary. (Twitch)