I get no kick from Kickstarter: Saving movies from democracy

March 21, 2013 at 1:01 PM
comment
You may not have heard, but a revolution might just be brewing in the way movies get made. 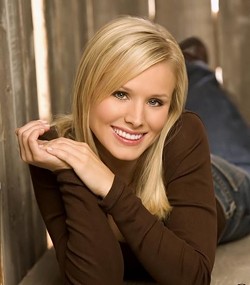 "Mars" attacks -- because the price was right.

Fans are turning to the crowd-funding site Kickstarter to bankroll feature films based on some of their favorite properties. A Veronica Mars movie passed its $2 million target after just 10 hours; no one knows how much it’ll rake in by the time its deadline arrives next month. Quirkmeister Bryan Fuller is looking seriously at the prospect of a Kickstarted Wonderfalls feature (and slightly less seriously at a Pushing Daisies one). And Joss Whedon had to quell the inevitable speculation over a new, fan-funded Firefly pic by pointing out that he’s in thrall to Disney for the next few years at least.

On paper and in a short term, there’s a lot to like about this new, greenlight-with-your-greenbacks model of getting a project before the cameras. Particularly when it comes to genre pictures, studio executives have traditionally been at something of a loss when it comes to judging the desires of the market. As odd as it now seems, as recently as 25 years ago, the list of supposedly unbankable categories included “movies based on comic books”; as recently as 10 years ago, it included “movies about pirates.” So yeah – anything that allows the public to demonstrate just what they want to see is a good thing.

In the short term, anyway. And in limited doses.

In the long term, and in larger doses, the Kickstarter model might in fact become a nightmare, particularly if it were to one day replace the traditional studio-driven approach to launching projects. (And the national news outlets that have picked up the Veronica Mars story are positing just that.) The most obvious concern is an economic one: What happens if the viewing audience ultimately accepts the idea that, in order to receive the sort of pictures it wants to see, it’s going to have to pay twice -- first on the front end, then again at the box office (or other paid viewing platform)? That’s the sort of reversal major entertainment conglomerates pray for. If they can succeed in attaching a hefty price tag to even the prospect of spectatorship (never mind the experience of it), there’s no limit to the profit they’re looking at, and the burden the rest of us will shoulder.

But even on the level of content, letting the masses decide what gets made could be more of a blessing than a curse. For one thing, it eliminates the possibility of the happy accident. It’s precisely because those studio heads don’t know what their audience wants that some interesting failures – and, once in a while, a definition-defying sleeper hit -- get through. The best of those execs know the limits of their insight, and rely instead on their gut to tell them when to roll the dice. Lord Lew Grade, the head of Britain’s ITC production house, was famously and self-admittedly tone-deaf to the actual artistic merit of the entertainment he financed. But he knew genius when he saw it, and he could smell a hit. Two manifestations of his savvy: allowing Patrick McGoohan to follow up Secret Agent with a defiantly obscure little series called The Prisoner, and giving the go-ahead to The Muppet Show after every network in America had passed on it.

Such instinct may be a vanishing phenomenon, it’s true. Frank Zappa once said that the music business was in better shape when the record labels were run by old men who knew they had no understanding of “young people’s music.” They couldn’t tell a commercially viable band from an obvious dud, so they ended up putting out some worthy records, entirely by accident. It was only when the old guys were replaced by younger, more “clued-in” types that the offerings of the major labels became stale and without merit, Zappa said: The new breed were so sure they knew how their market worked that they wouldn’t take a chance on anything. If that’s the landscape motion pictures are facing – and some would say they’ve arrived at it already – then a Kickstarted production slate has to be a step back toward consumer empowerment, correct?

Only if your definition of leisure-time enrichment is getting what you’ve already developed a taste for, and that ain’t art by any definition I recognize. Heck, it doesn’t even comport with my interpretation of “entertainment.” Hidden behind our culture of focus groups and opinion polls is the simple truth that, nine times out of 10, the public simply doesn’t know what it wants to see happen next. It only knows what it wanted yesterday, and you have to be a complete Philistine to perceive no difference between those two concepts.

"Mississippi will kick in a few bucks, but only if you make the hero a white guy."

To cite another example, back in 1946, America thought it was very interested in seeing Jimmy Stewart learn the value of life from a friendly angel. When they saw the actual film in question, they discovered that it was in fact a bracing cocktail of human disappointment and depression, attempted suicide, and ruin (both personal and societal). In the market for a gentle postwar frolic, they rejected it en masse. It took half a century for a new generation of Americans to realize that the story of George Bailey was pretty wonderful after all. Had the masses been in the driver’s seat from the get-go, that journey would never have reached the first rest stop.

And that only covers the movies that eventually claw their way to mass acclaim. What about the ones that never come close to turning a profit, and don’t even qualify as true cult items – but are still utterly cherished by the handful of folks who are wired up to respond to them? An accident isn’t any less happy when it only happens to you. Any movie lover’s list of favorites includes at least a few that almost nobody saw and even fewer people liked. Ask yourself how many of the gems in your own collection you would have known to invest in, just from a thumbnail description on a website. Kickstarter might be a great place to ask “More, please”; unless I’m missing something, it doesn’t seem particularly well-equipped to respond to “More, please, but different.”

Look, this isn’t just about movies; it’s about how you live your life. One of the things I’m most grateful for is that God has pretty consistently refused to give me what I've asked Him for. He wasn’t doing it to be mean, or out of some warped Old Testament version of tough love: He did it because I needed room for the other gifts He had waiting for me, ones my puny imagination couldn’t begin to comprehend. It may seem absurd to compare God to Harvey Weinstein, but I sure hope they both keep giving me stuff I’m too dumb to want.