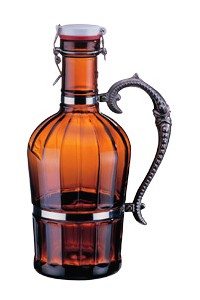 The elusive half-gallon growler in its natural habitat

Last week, as part of our Beer Issue coverage spanning all things fizzy, fantastic, and served in a stein, we filled you in on (surprise) a wonky, archaic piece of Florida legislation, this one prohibiting breweries from packaging their beer in 64-ounce resealable jugs, or growlers. Some proponents of the 64-ounce ban claim it serves as a deterrent to drunk and disorderly conduct (since nobody has ever gotten blitzed off a perfectly legal six-pack in the history of America), while opposition to the law begrudge it as fallout from an old bottling war between Miller and Anheuser Busch that needs to be repealed.

But these two sides may not have much to argue about soon. One of the bills moving through the Florida congress, Senate Bill 1344, was unanimously approved by the Senate Regulated Industries Committee yesterday. As the law currently sits, breweries may only sell 32-ounce and 128-ounce growlers: this legislation would permit the industry standard 64-ounce container to be sold and filled, as well.

These growlers are legal in 47 states. Florida is the nation's top tourist destination. Vacationers like to drink when they're, well, vacationing, and often bring their 64-ounce growlers here to fill. Why hasn't this potential boon been exploited sooner? (Psst: it might have to do with those state-mandated beer distributors).

This bill, sponsored by Sen. Jack Latvala, isn't out of the woods yet -- this is only the first obstacle for the legislation to beat. But the momentum of a unanimous vote at this juncture does portend a favorable outcome for Latvala's bill. You can practically hear the clink and clatter of beer lovers' pint glasses, rustling in anticipation.