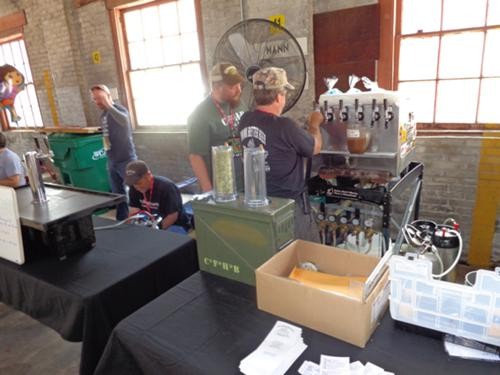 "The Beast," pictured above, will roar at this Saturday's East Orlando Beer Festival (photo courtesy of John Laconca/CFHB)

At forty-eight years old, Rossi’s Pizza and Pasta has collected quite an enchanting clutter in the taproom where Central Florida Homebrewers (CFHB) meet every month. More than the patchwork of signs from breweries across the country, the framed 2002 Tampa Bay Buccaneers Super Bowl memorabilia, or even the scatter-work paneled walls themselves, the Smoketeer ventilator -- that quiet, particleboard anachronism above the women’s bathroom door -- is my favorite totem in the room.

A dusty corner where technology and vice, much like the Beast, converged long ago.

The Beast, a six-line draft system, demanding respect from its metal cart perch. Measom raps the stainless steel medusa-crate, all piping and dials and cold beer, as a fellow member affixes a quarter keg to one of the Beast’s couplers, releasing a CO2 hiss.

“If you try and push it,” Measom says, “you’ll understand why.”

The Beast looks like a grumpy jellyfish slapped together from scraps with a cigarette snarl, plastic tubes dangling from its three-by-two cooler. The CFHB bought the Beast from a Daytona Craigslist user so members could tap small kegs of homebrew to share instead of schlepping crates of bottled beer into meetings.

It requires handlers like Measom, who, standing beside the Beast in his round-rimmed glasses -- shock of white hair coifed just so -- like a 19th century explorer harvesting a specimen. Measom must keep the Beast’s metal bin shoveled full of ice, the draft lines flowing properly. Because Measom doesn’t own a vehicle capable of transporting the Beast, members volunteer to transport the Beast every month, typically via pickup truck.

“As it turns out, the Beast is a more welcome guest at parties than [I am] and I end up getting a ride to and from,” Measom laughs.

Despite the Beast’s curmudgeon charm, the Central Florida Homebrewers is nonetheless about people, fizzing and bubbling over pints and bombers of beer, trading tips and recipes in the pursuit of the perfect brew since 1989. The Beast is a weird, wondrous frankenstein, but merely an extension of Measom and his friends’ work. An avatar for CFHB’s hodgepodge membership, from retired snowbirds and scruffy-faced hipsters, but never a foundation to stand on.

The Beast is often trundled outside Rossi’s, as well, where it serves perhaps its most illustrious duty: homebrewing ambassador. This Saturday the CFHB will lug the Beast to Waterford Lakes Town Center for the East Orlando Beer Festival, its lines flush with beer, dispensing to members and hardcore enthusiasts and the uninitiated alike. It’s a onerous task, but with a name like “The Beast,” you probably shouldn’t expect any less.

“I have been pouring beers at various festivals before I joined [CFHB], but the Beast is the first unit that has ever drawn so many questions, and people are amazed,” CFHB Vice President of Ales John Laconca says. “Our goal is to convert and educate beer drinkers from fizzy yellow stuff to beers ranging from German Pils to California style IPAs, one drinker at a time.”