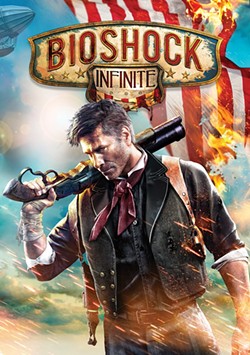 As a game reviewer, I tend to have a hard time finding the balance between explaining a game's 'play' value as compared to its storytelling value. We live in an odd transitional age where games aren't just pixels on a screen and the rest is left to your imagination. Nay, I say! Nowadays, we have the chance to move socio-political mountains with our interactive entertainment, and with Bioshock Infinite, all signs point to a notion that we truly have arrived in our gaming renaissance. Let's dive in

or up, for that matter.

In this mind-melting masterwork, you're let loose on the floating city of Columbia where the American dream reigns supreme...or at least the American dream as writer/director Ken Levine's twisted fucking mind has written it. Now, this floating fortress isn't a city in a time of post-destruction like the murky Rapture, in the first Bioshock game. There are no Splicers, Little Sisters, or Big Daddys right off the bat. Just a glowing metropolis full of people trying to live their racist little lives, who just don't know any better. Little do you know, you're coming has been foretold by the "Prophet" Zachary Hale Comstock, and the city is ready to fall around you at a moment's notice. What ensues is one of the most brilliant, exhilarating, and outright terrifying experiences in the history of video games. Not terrifying in the way Amnesia or Silent Hill (in its prime) could be, But in the way a classic literary satire can creep-the-piss out of you and probably change your life forever. What I'm trying to say, is that Levine is gaming's George Orwell.

I'll delve more into the story in a little bit, but let's chit-chat about the graphics. A lot of games nowadays have amazing visual appeal, but they don't really have a definitive art-style (listen to me sounding all hyper-pompous). Well, fear not my gamepad connoisseurs! From the sun drenched architecture of a sprawling cloud-city looming in the distance, to a satire-gag-filled theme park where the youth are bred like animals to fight in the local military, the world of Columbia never disappoints and is an absolute feast for the eyes. There is rarely a moment where you won't want to explore this twisted township for all it's worth.

In the gameplay department Infinite plays very much like the first BioShock, only with more guns and cooler Plasmids--which are called Vigors this time around. There's a neat upgrade system, and there's no doubt you'll mix-and-match sets of explosive justice and arrive on a favorite "one-two punch". I have to say though, the biggest and most brilliant new addition to combat would be the Sky-Line. Imagine riding the world's greatest roller coaster, only you could tell your cart where on the track to go at any given time

and kill people on it? Okay in real life, that would probably scare the hell out of others and/or end your life (you voodoo witch), but roll with me on this. I can't think of a time when I had more fun in a first-person shooter then when I'm careening down a rail towards my enemy only to knock him senseless into a cloudy grave, take out three other thugs in the distance with pinpoint accuracy, and then knife-down on somebody's head like some sort of 1920s sky-demon. Did they have sky-demons in the 1920s?...Shut up, they did now.

While we're on the subject of ripping holes in the space-time continuum (wait, we're not?

fuck it), your battle-buddy Elizabeth is also one of the most comprehensive and intuitive artificial intelligence partners you could ever ask for! She'll loot corpses for money, find some ammo, help you find hidden items, find some more ammo, and even interact with the objects around you. Seriously: She'll smell flowers, lean on walls, sit on nearby chairs, and interact with citizens. It's these little things that make Elizabeth feel like a living, breathing person and that's no small feat, especially in a world this impossible and fantastical. The best part: The game NEVER feels like an escort mission...Thank-ya, JEBUS!

I won't spoil the ending in this review, but I will say that it's quite a stunner. In fact, it concludes a story more poignant and home-hitting a game of this caliber should ever be allowed to get away with. BioShock Infinite works miracles and is truly the next generation of storytelling in this beautiful medium. The soundtrack is perfect, the voice acting is stellar, and I guarantee there will be something in this experience that will change the way you view the world around you--Yes, it's that good. I will say this though: an extra treat awaits those who have completed the first BioShock. Nothing life-changing

but you may shit your pants while your brain explodes. I mean...maybe that's just what happens when you mix Vigors.

I try to stray from using the word "perfect" as much as I can in these reviews, but as far as my history with gaming goes, this is as close as we are going to get to the-P-word for right now. The original BioShock reinvented gaming upon arrival, and this new entry doesn't just meet the bar set by its predecessor: It completely redefines it.