Praise the gods and strap on your douche-goggles: God Of War is back and lookin' mighty pretty! Unfortunately, the sexy graphical overhaul (and one hell of an epic ending) is one of the only upgrades this title flaunts to set itself apart from its predecessors. Other than that, it's just business as usual for this multi-million-dollar series.

To me, God Of War: Ascension just seems like Sony is trying to squeeze every last dollar out of this franchise that they can, and unfortunately, the desperation shows in scores. In an attempt to add a little bit more maturity to Kratos (our brooding bastard-of-a-protagonist), the writers have sullied the brute, cut down on the screamy dialogue (I never thought I'd actually miss that), and given him a heartfelt chance at redemption to break free of the chains of Aries. It's just that, when you're surrounded by titties, mutilation, and other gimmicky items of a bro-tastic nature, the somber tone of Kratos (my auto-correct reccomended "Crate Toasts"), you're left with a story doesn't really carry a lot of weight. It's as if the all star quarterback on my high school football team decided to write a piece of fan-fiction. Sure, it'll end up being really popular, but we all know that it's a total piece of crap

It'll still get laid though

more than me...anyway, enough about my childhood.

I will say that one redeeming quality of this otherwise-undercooked prequel would have to be the way it plays. This will probably be the main point of forgiveness from fans of the series, and it almost won me over. Almost. You know how in previous entries, Kratos was given a bunch of superfluous weaponry that you never really used? I mean, I always just wanted to use the Chaos Blades forever because they're fun, swingy, and I'm just not in the mood to use fist-punchy gloves--or whatever the shit those were supposed to be. WELL this time, upgrades come in the form of godly powers infused onto...wait for it...the Chaos Blades! Huzzah! The amount of destruction you can do with these things this time around is so much fun, and I was really glad to see the series fall back on it's raw, combat-based roots. The more I killed, the better I felt. But that might be something else, and will remain between myself and my therapist. 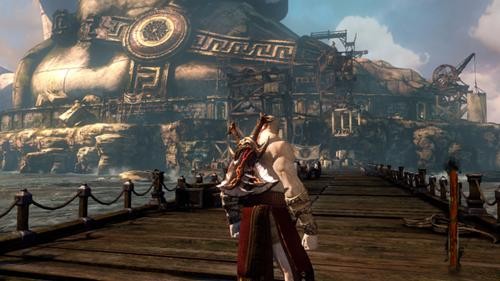 The multiplayer in this game is another very worthwhile bonus. It doesn't take a lot of thought, And it doesn't seem to have a lot of staying power, but it really does feel good crafting your own warrior and letting him loose on the masses. With the thought and effort put into this area of the game, it almost feels like a completely different team was in charge. It's weird feeling like the single player campaign was the afterthought. What gives, Santa Monica Studios? Did you run out of time?

All-in-all, I think it's about time we switch things up with the God Of War franchise. After the third game, I had this really cool theory that Kratos' story was actually the end of polytheism as we know it, the untold story. How cool would that have been? After this entry, I'd really like to see Santa Monica Studios explore different polytheistic religions: Wouldn't it be amazing to see a title set in ancient Egypt? What about Norse mythology? The possibilities are endless, and it's not like they really bent over backwards to develop Kratos over the years. He's still as one-dimensional as always, and I'm pretty sure we've all had enough of him.

God Of War: Ascension isn't going to win any awards any time soon, and it spends too little time exploring the epic set pieces we have come to expect from the series, but some solid gameplay and a little heart put into the multiplayer makes it worth your time. The single-player campaign might leave you with a sour taste in your mouth though

Must have been all the cheese

because the game is cheesy