In Your Queue: Juno Temple Edition 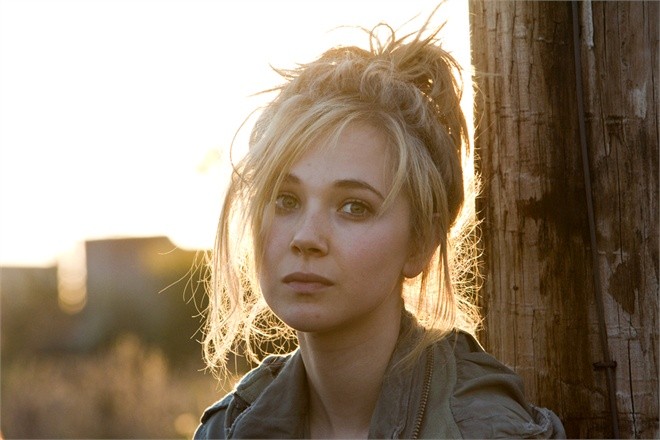 It happened just sort of by accident, but there has been a single prominent theme recurring in a lot of the films I've been watching over the last few weeks: the wild flaxen mop of doll hair and bright, mischievous punim of Juno Temple. I didn't set out to watch any Juno Temple films -- until now she was just Julian Temple's daughter who wants to be an actress -- but there she was, film after film, with her wild hair and faint voice. The films are of varying quality, which is obviously frustrating. I'm honestly not even sure if I like her as an actress yet, but it's hard to take your eyes off of this strange English pixie, who is just as likely to be playing American white trash as anything else.

It's been a long time since Billy Friedkin had anything resembling a hit film (Blue Chips by my count), but he actually dips in and out of his 70s heyday excellence with this story of a broken trailer trash family who are out to hire a someone to kill the estranged matriarch and collect on an insurance policy. Rote stuff, but the way its played by everyone involved elevates its to the heavens. In one of a string of maniacally great characters he's played of late, Matthew McConaughey plays the titular Killer Joe, the Texas Ranger/hitman that Chris (Emile Hirsh) hires. He's an exacting guy, one who is as tough (and Texan) as they come, but who can barely keep the thing together in the face of  this family of hicks who are in way over their heads. The in-fighting and pettiness of Chris and his parents (Thomas Hayden Church and Gina Gershon) borders on genius, but makes Killer Joe reconsider the offer until he falls in love with Chris's little sister, Dottie (Juno Temple), the angelic waif who may not be as simple as she seems. I can't figure out why this film never caught on when it was released last year. It's an injustice. The film is absurdly hilarious, the darkest of dark comedy, and, if nothing else, you'll never think of fried chicken the same way again. (Available on Amazon and YouTube)

Jack and Diane is another film I'm surprised didn't catch on, but somewhat less surprised than Killer Joe. It's a fairly straight-forward story of the awkwardness and, sometimes, stupidity of an all consuming young love. Riley Keough is unrecognizable as Jack, a tough New York girl who is lost in an emotional fog since her older brother died. The randomness of life puts Diane (Juno Temple) before her path and the two bond tightly, in a way neither of them were entirely prepared for. Like most people who put on a tough exterior, Jack is a naive puddle of  goo under that hard shell. Diane is the first person she's let wade into that goo, but secret gooeyness, especially of the love-sick teenage variety, is a shockingly complicated thing -- surely you all remember your own gooeyness, and how embarrassing it was. But it might be Diane with the bigger demon inside of her -- a burgeoning secret warewolf threatening to burst free (done in gorgeous but not entirely enmeshed stop motion sequences put together by the Brothers Quay) and hurt everything Diane cares about. In that act, it's a surprisingly intimate film that plays the emotion with the right balance, never turning it into something to squirm away from, with a real throwback 90s New York indie film feel to it. (Available on Netflix)

In Little Birds, Juno Temple and Kay Panabaker star as Lily and Alison, mismatched best friends stuck in a boring, economically dead small town along the Salton Sea. As a coming-of-age drama, Little Birds is something of a wasted attempt. I say that with frustration, not because the film is a bad one, but because it's a good one, but should have been a much better one. Writer-director Eldgin James doesn't know what he has here with his story or his characters and blows it by setting off on the most predictable adventure, taking the girls out of their element and landing them in LA with a bunch of skateboarding streetkids who turn out to be -- surprise -- bad news. Lily loves the feeling of being bad -- really bad -- for the first time, but Alison is stuck in the adventure as the stick in the mud naysayer. Of course ends up being right about everything, she just isn't any fun. It's small town friendship syndrome -- as Lily says, who else was she supposed to hang out with? But in LA, the pond is much bigger, and the girls much further apart, both emotionally and physically -- Lily and Alison spend much of the time apart during their adventure, leaving the growing tear largely unmined. It becomes a plot-driven mess once they arrive in LA instead of the character drama it starts off as in the Salton Sea, and leaves Leslie Mann, Kate Bosworth and Neal McDonagh -- and Reed Morano's camerawork -- behind as little more than high-priced extras. (Available on Netflix)