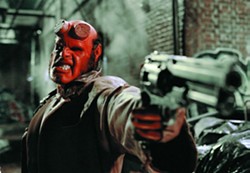 I don't know if it was the "big" news of the week, but in an interview with Comic Book Resources this week, Hellboy creator and artist Mike Mignola quashed any hope of a third Hellboy movie. I'm not necessarily disappointed that there won't be a Hellboy 3 (I really hated Hellboy 2, aside from Ron Perlman as HB), but I am disappointed at the idea of it being the end the character as a movie entity entirely. Because of how he started out, HB is the perfect kind of character for a series of short films based on some of the one-shot issues (or new stories from Mignola) to run in front of other films. What a draw that could be for the fate of other films. If you told me there was a HB short running in front of some terrible horror movie that I'd never want to see, I'd go see it just for the HB short. Perlman is just so perfect as the big guy, it's a shame to see it end.

-There is also Charlie Rose and his roundtable. (Slate)

-It's been a few weeks since animation historian Jerry Beck split up with Cartoon Brew, but he's got a new blog at IndieWire called Animation Scoop. (Animation Scoop)

-Wong Kar Wai's Grandmasters (probably a better title since it's not just about Ip Man) will be out this august, supposedly wide. We'll see. (The Film Stage)

-Earlier this year ESPN put out a 30 for 30 short called Holy Grail about the famous Gretzky T206 Honus Wagner card, which sold for $2.8m to Arizona Diamondbacks owner  Ken Kendrick (a different version of the card sold a few weeks ago for $2.1m, yet my Don Mattingly rookie cards are worth less than half of what I paid for them). In the film, there is an accusation made that Bill Mastro, who owned the card in the 80s, cut the edges to get a higher rating from the grading company PSA. Well, it's not longer an accusation -- he admitted to it court documents. (Grantland)

-Shigeru Miyaomoto, creator of Mario Bros, Donkey Kong and The Legend of Zelda, dishes on Nintendo's history, including why Luigi is green. (Rolling Stone)

-For as much success as Texas-based filmmakers have been having over the last couple of years, it's left a lot of souls behind in the dust. (NY Times)

-Rob Schnieder explains why his movies suck and are not universally beloved by critics. I don't buy it, but he deserves a say since half of the obit blogs for Ebert last week quoted the "your movie sucks" line. (CriticWire)

-Coming soon to a theater (of war) near you, LASER GUNS. (NY Times)

-To honor the passing of former Prime Minister Margaret Thatcher, Britons have been buying Ding Dong, the Witch is Dead from The Wizard of Oz en masse. Cheers. (NBC)

-The summer comedy romp that won over Sundance, The Way, Way, Back. (Apple)

-The first poster for The Bling Ring. Makes sense if you know the story but it doesn't exactly pop out at you. (Perez Hilton)

-Might as well take a look at the first clip from The Bling Ring as well. (Mtv)

-The British ensemble comedy is back in I Give it a Year. (YouTube)