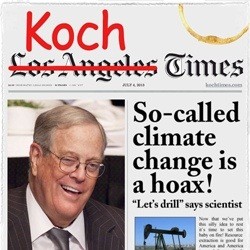 In March, we reported in Happytown that there was some speculation that the Koch Bros., the conservative, wealthy duo from Koch Family Industries who use their money to throw their weight behind such dubious causes as ALEC and Americans for Prosperity, were rumored to have interest in getting into the print-news business. Specifically by buying up papers owned by the beleaguered Tribune Co. We laughed a little about our favorite Orlando Sentinel scribes having to work for a paper whose owners have such a right-wing political agenda that they make Newt Gingrich look moderate.

Well, it's less funny now that the New York Times has reported that the brothers are exploring a bid to buy the Sentinel, the Baltimore Sun, the Hartford Courant, the LA Times and the Chicago Tribune.

On a side note, I recently received a call from an organization called Watchdog.org, offering the Weekly free investigative content and coverage of Tallahassee in exchange for links back to their website. They are establishing state bureaus, they told me, and wanted to partner with local media outlets. I know this kind of thing doesn't come cheap, so I asked how the coverage was funded and whether it was partisan. I was told that it was completely nonpartisan, nonprofit and funded by foundations along the same model as the incomparable investigative-journalism nonprofit ProPublica.org (which Orlando Weekly, NPR and other news outlets often cite and work with to offer investigative stories of national and regional importance).

So I did a bit of digging and quickly found that not only is Watchdog.org not nonpartisan, it's a project of the conservative think tank the Franklin Institute for Government and Public Integrity (an organization so secretive about its own funding that it refuses to discuss or name its donors).

Needless to say, OW declined to partner with Watchdog. But that doesn't mean the organization won't find plenty of partners out there in the journalism world. I'm sure it will. And this is troubling to me – not because a conservative foundation is using media to have its voice heard, but because conservative forces seem to have decided that its not enough to try to insert their voices in our political dialogue by buying access to politicians.  They now are going to buy their way into the media (well, more so than they have already) by buying the media, running it and passing it off as journalism. Can't get a journalist to get your point of view across? If you're a rich foundation or executive, you can just buy up the newspaper and dominate the dialogue. Think there are too many struggling little liberal media outlets out there, reaching people with the opposite point of view than the one you espouse? Take advantage of the fact that they are cash-poor and always looking for new ways to offer more coverage. Start your own news source and offer to partner with them for free. Don't tell them where your money comes from. Just cross your fingers and hope they, and the community they serve, never look behind the curtain to see who's pulling the strings.

UPDATE: Jim Romenesko has a post on his site today from a Baltimore Sun reporter who laments the long, slow decline of what used to be a pretty bang-up paper. Now, he writes, part of the editorial department is being rented out to Netflix series House of Cards, which is using it for a set.