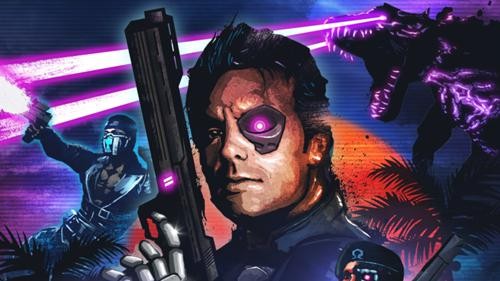 The muffled 'clink-clank' of my cybernetic legs compliment a cheesy 80's club beat as I creep through the jungle towards the rat bastard. He doesn't suspect a thing and my blood is boiling. Suddenly a loud "CRACK" from above and I jerkily fling my bow to the clouds. I just barely make out a tear of lightning streaking menacingly across a bruise-toned sky. "Get it together, man!" I wise-up and continue weaving through ferns.

The music crescendos and the bass is thumping like nightclub scene in American Psycho. In a blaze of glory, I dart through the brush, swing up behind the poor sap and shove a glowing blue knife through his esophagus!...Queue the one-liner:

"Way to die on the on the job, dickshitter." That's Far Cry 3: Blood Dragon.

When Far Cry 3 originally released, I was in hyper-collector mode: I had just finished Assassin's Creed III, collected all the superfluous items, unlocked all the things (not one of which I could remember now if you asked me), and I was hungry for more. Then FC3 came along and I was whisked away to a tropical island filled with pirate-y psychopaths, and I did nothing but explore for about a month with the same adventurer's spirit. Then it was over. The ending disappointed a bit, but it was the journey that made the game. The freedom of exploration stayed with me.

Blood Dragon is a completely separate take on the FC3 aesthetic, offering the same thrills and exploration as the original, but with a major twist: Everything has been vomited-upon by a campy 80's sci-fi/action flick that never (but should have) existed. To explain the plot would give away half the fun, but you play as a 'Mark IV Cyber Commando' named Rex 'Power' Colt (Michael Biehn) as you uncover the sinister scheme of a former agent gone rogue. The rest, folks, is all delivery. The third-wall-breaking self-aware nature of the dialogue and hilarious one-liners make this one of the funniest gaming experiences since Conker's Bad Fur Day, and it clocks in at 6-10 hours of gameplay.

The $15 budget price is tough to argue, especially when you're handed a toxically-radioactive island to traverse, animals to hunt, and collectables a-go-go. Some would argue that the side-missions could get a little repetitive, but they're 100% necessary to upgrade your weaponry and become the ultimate cyber-badass. Not to mention, they successfully fulfill the most basic need in the human condition: To hunt and build. For completionists, this will keep you busy for a good while.

With Far Cry 3 having left its mark on video game history, it's only fitting that the creative minds at Ubisoft use that fame to create something so over-the-top stupid that it deserves commendation

if only for embracing that neon bravado with a confident smirk.

"FUCK stands for 'Failing to Understand our Capacity for Kindness'!"