May 07, 2013 at 3:54 PM
comment
A few years ago, I went to one of those MoveOn house parties where the featured entertainment was a screening of Robert Greenwald’s documentary Outfoxed. A bunch of us Orlando-area libs sat and watched in horrified fascination as Greenwald laid out the way in which the Fox News Channel had established itself as a disinformation tool of the extremist right.

When the movie was over, I was approached by an acquaintance who was then working for the Orlando Sentinel. “I feel so guilty,” she said. She added something about serving Satan; I can’t recall the exact wording. But I knew what she meant: Even though she was merely a contributor to the Sentinel’s arts-and-entertainment offering, not its news or (God forbid!) editorial pages, she was in her own way helping to further a regressive, reactionary worldview that wouldn’t have been terribly out of place on Fox. And she felt just awful about it.

I wanted to answer, “Yet you keep cashing the checks.” Instead, I muttered something I hoped would fall between empathy and absolution. The attitude I had then was the one I have now: Anybody who is willing to suspend his principles for something as remuneratively minor as a print-media job in Orlando, Florida, is just an awfully cheap date.

That’s why I’m finding it hard to be as enthusiastic as I should be over the Chicken Little routine that’s currently going on at the Tribune Company. It would be wonderful to believe that all of those Los Angeles Times reporters who say they’ll quit their jobs if the Koch brothers buy the chain are telling the truth, and that their departure would really matter. Then again, ever notice how many things that would be wonderful to believe are also hard to believe? Maybe this is the one thing on Earth I’m still cynical about, but the prospect of mass walkouts at a daily-newspaper company strikes me as not only unrealistic but vaguely uninspiring -- for a few nagging reasons.

The first is that it’s just not all that credible a negotiating tactic. To put it bluntly, anyone who is still slaving away as a full-time employee at a daily in 2013 is doing it because she has no place else to go. Quitting a dying trade is not a threat that carries much weight. And you can bet your bottom dollar that the Kochs know it, too.

"You read Charley Reese for years -- you're going to complain NOW?"

A petition is going around to “support” the L.A. Times people who are promising to leave – and while I admire the goals of the petitioners, I can’t quite discern what they think they’re going to accomplish. What does it mean for us petition-signers to demonstrate solidarity with those staffers? Are we agreeing to help support them financially after they quit? Probably not. So if we’re simply bringing the issue to light, how is that going to dissuade the current owners from selling? How is it supposed to scare off the Kochs? They would have to replace a bunch of the staff; so what? They would probably end up doing that anyway. Now they’d just be able to do it all at once, instead of gradually phasing out whichever writers would be likely to obstruct their vision.

Which brings me to a larger point: How many would that be, anyway? It isn’t as if the standards of mainstream print journalism have remained so estimably high that the concept of a “last straw” has much ethical torque. It’s tempting to see valor in the mulled Tribune walkout, until you realize what this bunch have gone along with until now. I just can’t find a moral hero in somebody who decided that pushing the agenda of Sam Zell was something he could live with, but that the Kochs are a bridge too far. To return to my old Sentinel pal’s infernal analogy, it’s like selling your soul to the devil and then pulling a hissy when he accepts an eBay bid for it from Pol Pot. 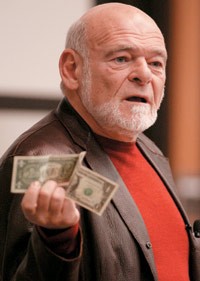 Sam Zell displays his deep regard for several U.S. Presidents.

The other day, I received an email from someone who was considering ways to show support for the Sentinel staff should they stage a walkout of the kind being mulled in California. I didn’t bother to point out that this hasn’t actually happened yet, and that we should probably wait until it does; I was too busy stifling the urge to snark back, “A petition to help show Sentinel writers the door? Sure, I’ll sign! But where were you 10 years ago?”

Behind that childish display of professional discourtesy lies a soberer truth, which is that, at this late stage, a compromised Sentinel would be a hard thing to identify. If our paper of record ever had a Local section with a real zeal for advancing the public good, it was well before I moved here 18 years ago; and I highly doubt there was a time when the daily’s editorial board wasn’t (to use the words of yet another Sentinel arts writer I used to know) “to the right of Attila the Hun.” This is not the sort of tireless champion the little guy dreads losing.

Don’t get me wrong: I wouldn’t begin to suggest that an Orlando Sentinel keyed to the Kochs' vision would be good for the community. But I also don’t see how it would be significantly worse.  Any reader who is still taking his cues from that paper is not someone who can be led much farther astray. Last year, the Sentinel made itself a laughingstock by endorsing Mitt Romney. If, in 2016, a Koch-run version of the paper got behind Ted Cruz, could we really mourn that a viable vote had been lost?

Maybe I’m just bitter. Maybe I’m dead-ass wrong, and it’s important for every Tribune employee and reader around the country to look upon the looming Koch takeover and declare, “This will not stand.” But from a moral perspective, I just think that ship sailed long ago. And I can’t call up the passion to sing even one verse of “The Wreck of the Edmund Fitzgerald” over it.

The watchdogs of the Fourth Estate long ago became enablers with mortgages. Now that they’ve suddenly decided the sky is falling, maybe they need to be reminded that it started falling a long time ago. And it didn’t start to fall of its own accord: They helped bring it down, on all of us. If I can be allowed one more metaphor, they should have known that the path they were on was just a gateway drug to Koch.