Film Review: From Up on Poppy Hill - Goro Miyazaki (3 stars) 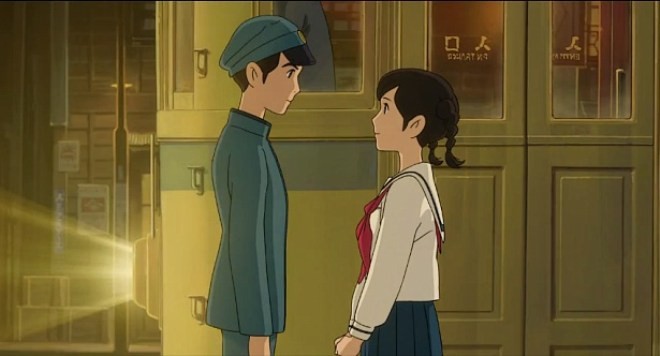 From Up on Poppy Hill, a high school melodrama set right before the 1964 Tokyo Olympics, is somewhat of a departure from the norm for Studio Ghibli. There are no flying pigs, wolf girls or floating cities. Instead, there is young love – and only young love.

Umi and Shun (voiced by Sarah Bolger and Anton Yeltin in this dubbed version from GKids) are classmates with an affinity for one another, but nerves and family expectations keep them at an arm’s length, leaving them together only when there is a project to be done, like printing the school paper or helping Shun and his buddies save their filthy clubhouse from the wrecking ball.

There is one other thing that keeps them at an emotional distance: they might actually be brother and sister, a family torn apart during the post-war social upheaval.

That’s a storyline worthy of General Hospital, sure, but Goro Miyazaki doesn’t take the dark melodrama track with his second film for his father’s studio. It’s a sweet film, almost an idealized film of youth and zeitgeist. With the coming of the Olympics and student activism, it’s a time of change in Japan that is even affecting this small coastal province outside of Tokyo.

Umi is a model of tradition, running her grandmother’s boarding house and raising her younger sister Sora (The Hunger Games’ Isabelle Fuhrman) and brother (Alex Wolff) when she isn’t at school. Shun is somewhat stuck in the middle of tradition and revolution, a new kind of activist fighting against the higher ups in order to keep a dusty old clubhouse from being modernized. The analogies and metaphor might come from the manga that the film is based on, but the soft, measured feel of youth seems to come directly from Hayao Miyazaki’s memory, more like reminiscence than anything else.

I do feel a little badly for Goro Miyazaki though, being stuck with that name and forever living under the eclipsing shadow of his legendary father. If he were Goro Suzuki, say, he might be regarded better, a good director but not a great director; at least he would be regarded without a qualifier. The famous last name might not come with all of the famous father’s talent, but he’s surely got enough of it to consider him on his own when his next film comes out.