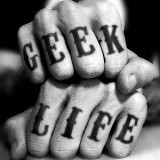 I always thought a geek was a sideshow carny who bites the heads off of live chickens. But according to juggler Aji Slater's Geek Life, geeks are actually distinguished by three characteristics: they are infatuated with a niche topic, they are "out" about their obsession, and they bond socially with each other over their shared interest (nerds are geeks twisted by solitude, like Gollum). All three identifiers apply to Aji, whose geeky monomania for circus tricks and other useless skills has taken to the Golden Gate Bridge, the Duluth airport, and other glamours landmarks.

Raised by a book-loving mother and a Trekkie father, it was almost inevitable that Aji's career path would stray from an art school scholarship to the Ringling Brothers circus, with stops at backyard roller-coasters and San Francisco spiegeltents along the way, in his quest to inject surreality into the everyday. X peppers his self-depreciating monologue with snazzy pratfalls, hillarious hat juggling, egg-ceptional balancing stunts, and nerdcore rap, even recruiting an audience member in the process for some romantic assistance.

The show isn't as tightly scripted as some, and a few tricks may go away, but Aji's off-hand conversational tone and goofy self-mocking charm smooths over any shakiness. Geeks of any genre -- gearheads, audiophiles, mixologists, whatever -- should walk out grinning. And don't laugh at them, fantasy football fans: as Aji says, you're only a 20-side die away from playing Dungeons & Dragons.

Note: This review is based on a preview performance that the press was invited to attend.