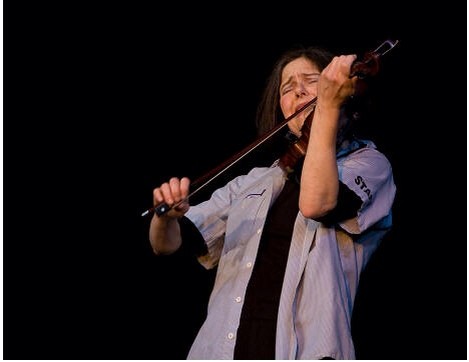 Have you ever passed a street musician on the sidewalk, their open instrument case hopefully holding a few crumpled bills, and wondered how they got there? Rachel Nelson's one-woman show The Urban Hermit offers one explanation. Her story takes her from a tiny garret apartment, a perpetually-stoned college grad hoarding cash in a tobacco tin, to the coffeehouses and pedestrian malls where she learns to ply her trade. Crippling social anxiety and substance addiction, enabled by a cheap Greyhoud go-anywhere bus pass, propels Nelson on a zig-zagging cross-country odyssey involving a San Francisco revival cinema and racist New Orleans police, before finally leading her to the sobriety and serenity she seeks.

Nelson says that "every story lives in the moment it is told and received," but I'd be more receptive to her tales if they didn't meander as aimlessly as her transcontinental travels. She has an individualistic physicality to her movement (at one point personifying trees "gnarled like old dancers in fantastic poses") and a flair for folk instrumentals (guitar, violin, kazoo, and even washtub bass) but her soft speaking voice and unsteady singing eventually strained my patience. Nelson is so open and unassuming that I'd love to "cross over to [her] side of the street and drop a tip in [her] case" as she requests. Unfortunately, despite Nelson's honest efforts, for a show with an explicit theme of "human connection," I had a tough time connecting. Your mileage may vary.

Note: This review is based on a preview performance that the press was invited to attend.