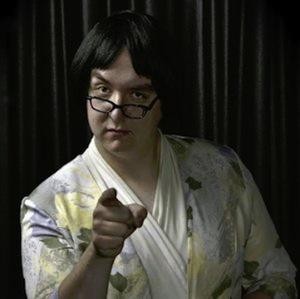 I have seen God. And I’m elated to report that He’s everything we always hoped He would be.

First of all, He’s a brilliant standup comedian with a wicked sense of humor (as you may have already surmised from the way your life has turned out since high school). For another, He is indeed omniscient, bursting with deep insight into everything from the history of recorded music to the failings of the Lynx bus system. Oh, and He’s also a hairy-legged Scotsman dressed in a floral women’s “power suit” from the 1980s. Okay, that last part wasn’t all that predictable – but in hindsight, doesn’t it seem to explain a whole buncha stuff?

Listen, enough of me being cute. What you really want to know is that comic Mike Delamont’s God trip is one of the greatest standup performances I’ve heard in my 48 years on this planet. No hyperbole. I’m talking split-your-sides, clap-your-hands-raw, point-furiously-with-your-forefinger hilarious. The whole setup is genius to begin with, as it allows Delamont to go just about anywhere: When he discusses his (I mean His) role in creation, it’s fresh and exciting because he’s a potty-mouthed Scotsman in drag; when he shifts to more mundane topics like the foolhardiness of bungee jumping, it’s still fresh and exciting because

well, because he’s God. Think George Burns crossed with Dame Edna, then pin the Virtuoso Meter all the way to the right.

Delamont is smart enough to recognize the essential spiritual sweetness at the heart of his routine, and he trusts us to perceive it, too. So in the show’s unavoidable “message” segment, he knows he doesn’t have to go too far with serious sentiment before pulling back into yet another world-class, room-slaying punchline.

You’ll hope the hour never ends. In fact, you might find yourself wishing you would die right there, so you could be with God forever. The good news is that you’ll be laughing so hard you just might.

God is a Scottish Drag Queen