11 insane things we'd like to do at Disney after dark

May 20, 2013 at 6:51 PM
comment
If you're a Disney fan, you may have heard that Disney is keeping three of its parks – the Magic Kingdom here in Orlando, as well as Disneyland Park and Disney Adventure Park in California – open for 24 hours straight on May 24. We're sure it'll be fun and all, if you're into that kind of thing. But our idea of an up-all-night Disney adventure is a little bit different than what we think Disney execs have in mind. Here's our list of 11 things we'd want to do at Disney after dark.

1. Try to seduce a Disney character into letting us see their Disney-approved underpants*

via jocknotized.tumblr.com *Until 2001, Disney required cast members to wear Disney-issued underwear because regular underwear tended to bunch up under the costumes. To cast members were given undergarments to put on that they had to turn in at the end of a shift so it could be laundered. They'd then pick up a different set for the next shift. In 2001, after a lawsuit, that policy changed – now cast members get their own personal underwear (jock straps, bike shorts, tights, etc.) that they don't have to share with others.

2. Dump a loved one's ashes in the Haunted Mansion

This is something that really happens at Disney's Haunted Mansion and Pirates of the Caribbean attractions. And when better to do it than after dark, when everyone's all bleary-eyed with Disney mania.

3. Host a dance party on Main Street U.S.A. while DJing Bruce Springsteen from your iPhone

4. Hook up in Cinderella's Castle suite

6. Parade around in a "coconut bra" made of Orange Bird cups

7. Run around the secret underground corridors

via disneypix.com These are real things that exist at the parks. They use them for characters to do out-of-character stuff (like, go to the bathroom, check in for a shift) without wrecking the magic. 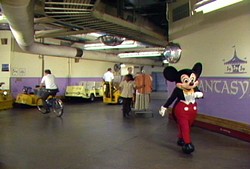 Someone has actually done this and lived to tell about it.

9. Make out in Minnie's Country House*

*The Disney experts in the comments have broken the news that Minnie's Country House no longer exists. Oh noes! Now we will never be able to actually live this this ridiculous fantasy out in real life.

10. Get high and gorge on Pecos Bill's buffet for an hour

11. Skinny-dip in the Laughing Place at Splash Mountain 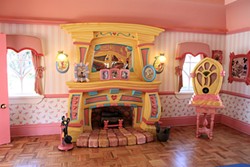 Email us at feed[email protected].