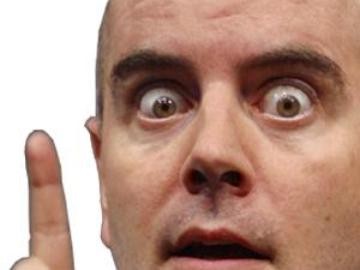 “All’s well that ends well,” wrote the Bard. And, certainly, Keir Cutler’s one-act dramedy, Teaching Shakespeare, not only finishes with a flourish but also starts strongly and does just about everything in between on its way to becoming perhaps the best one-man show at this year’s Fringe.

Described in the festival program as a parody of a college Shakespeare class, it could more accurately be viewed as the life of one man – an over-the-top college professor – reduced to the microcosm of an hourlong lecture. While teaching Shakespeare to us – we, the audience, essentially become his students – Cutler’s character jumps from topic to topic with the energy of Puck while laying bare his anxieties over his tenure review, his crumbling marriage and even his bitterness over some less-than-positive teacher evaluations.

“My wife left me recently; she read your evaluations,” the professor laments in one of his many sharply comic, yet slightly sad, lines. “The faculty wants me out; Shakespeare is my only friend.”

Indeed, by the time this “class” is done, Shakespeare feels like your best friend too, as Cutler manages to not only mock Shakespeare theory in the style of Christopher Guest but also offer some surprisingly insightful takes on the canon, all while descending into a combination of the playful madness of Petruchio and the self-destructive insanity of Hamlet. And that ability to juggle comedy, drama, parody and a real respect for the master playwright is what lands Cutler’s creation in a class by itself.

Cutler has performed this piece more than 150 times across Canada since 1999. It’s also had two theatrical runs in New York City, was televised on Bravo and has received numerous awards. The praise is well-deserved. In fact, this is one class from which you hope never to be dismissed.