by Kelly Chambers and Erin Sullivan 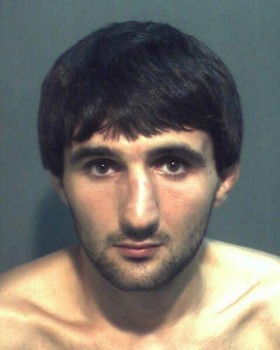 Ibragim Todashev, an Orlando resident of Chechen descent, was shot and killed early Wednesday morning by an FBI agent who considered him to be an “imminent threat.” The FBI Boston Division says that Todashev was being interviewed by the “FBI agent along with two Massachusetts State Police troopers and other law enforcement personnel, in connection with the Boston Marathon bombing investigation when a violent confrontation was initiated by the individual.” The FBI and local news accounts have reported that the fatal shooting of Todashev occurred in an apartment on Peregrine Drive in Orlando. FBI Special Agent Dave Couvertier says that “during the confrontation, the individual was killed and the agent sustained non-life threatening injuries.”

No connection with the actual Boston Marathon bombing has been currently reported, but CBS News reported earlier today that "sources" say that authorities went to the apartment at 6022 Peregrine Drive because they had "strong evidence" to connect Todashev to a grisly 2011 triple killing that took place in Waltham, Mass., on the 10th anniversary of 9/11. The three victims of that killing were Brendan Mess (age 25), Erik Weissman (31) and Raphael Teken (37). Mess was a friend of Tamerlan Tsarnaev, and they reportedly trained together in mixed martial arts. The bodies of the three men were found in a Waltham apartment with their throats slit, their heads nearly decapitated, their bodies covered in marijuana. In late 2011, the Brandeis Hoot reported that police had no leads related to the killing and that the investigation seemed to have come to a halt. In April 2013, though, shortly after the bombings at the Boston marathon, police began investigating whether suspected bomber Tamerlan Tsarnaev may have been linked to the murders.

Todashev, who once lived in Boston and was acquainted with Tsarnaev, may have implicated himself and Tsarnaev in the 2011 murders to authorities when they showed up at his Orlando apartment. The FBI had already interviewed him before, but it's unclear what brought them back early this morning. Reports say that Todashev may have become violent when the FBI pressed him for a full confession to the 2011 incident.

Earlier today, we received an incident from the Orlando Police Department stating that at about 8 a.m., an officer responded to 6022 Peregrine Ave. in reference to a "suspicious incident." The matter was then turned over to a federal agency for further investigation.

The FBI says a Washington-based deadly force investigative team is being sent to Orlando to investigate the shooting on Peregrine Drive. The incident is currently under review and no further details have been released. The only statement the FBI has made so far is to say:

[An FBI agent] along with two Massachusetts State Police troopers and other law enforcement personnel were interviewing an individual in connection with the Boston Marathon bombing investigation when a violent confrontation was initiated by the individual. During the confrontation, the individual was killed and the agent sustained non-life threatening injuries. As this incident is under review, we have no further details at this time.

Here's a tribute video to Brendan Mess posted to YouTube in 2012.

And here's a video released on Sept. 15, 2011 when police first began investigating the triple-murder. At the time, authorities didn't seem to have any leads but felt the murder was an isolated incident: