Harold Lloyd: The Other, Other Guy (TCM Marathon Tonight)

The order changes depending on the person you ask. Some prefer the graceful stunts of Chaplin’s sweet-natured Tramp, a self-sacrificing vagabond who buys his way into your heart with a squint of doe eyes. Some prefer the stone-faced earnestness of Keaton, whose grand, sweeping stunts were as dangerous as they were brilliant. The one thing no one ever argues about is third place. It’s Harold Lloyd.

Even Lloyd fans have a difficult time arguing the point, but there is degree: is it a close third or third by a longshot? Again, it depends who you ask.

That part of the conversation is likely to ramp up in the coming weeks, as Turner Classic Movies airs a 10 hour Lloyd retrospective marathon tonight, and the Criterion Collection releases Safety Last! (aka the one where he hangs from the clock) on DVD and Bluray on June 18th. The marathon features 16 short subjects and four features, and kicks off with Safety Last! at 8pm.

That scene of Lloyd hanging from the clock, dangling over 1920s Los Angeles is one of the most enduring images in film history, and was paid homage in later films like Back to the Future and Hugo. Like the image of Justus D. Barnes firing blanks directly into the camera in the The Great Train Robbery (which itself was paid homage to in Goodfellas), the image of Lloyd hanging from the clock face is more famous than Lloyd himself, and the only thing many people know about him. 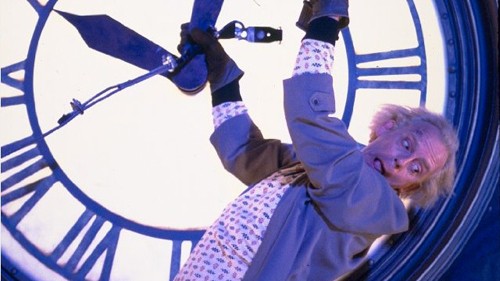 But he’s more than the clock, just like Keaton is way more than a falling house. Lloyd’s comedy was wry, playing off of the idea of the naive young man out to blaze a path and find the best girl. Lloyd, who often played a character simply known as The Boy, has a bold touch of smart ass to him, but it’s less of the tee-hee sort that Chaplin possesses and more of the troublemaker sort. It’s a touch that comes through most obviously as the buffoon’s ego that The Boy starts out most of his films with. It’s a surety of self and of talent that begins unearned, which is common, but the twist is that it doesn’t necessarily become earned as the film unwinds.

In one of the more bizarre comedy short subjects of the silent era, Ring Up the Curtain (1919), Lloyd plays a clod of a stage hand who is trying to win the affection of Bebe Daniels, who is the star of the show. Not only does The Boy does not deserve The Girl but he doesn’t get her and the film ends with Lloyd trying to gas himself in despair.

In the silent era, when films were pure entertainment and not at all thought of as art, that took a lot guts to do outside of a melodrama. The buffoon’s ego is a thing of bravery, but it can make it hard to like The Boy, especially in the short subjects as he was still finding his style. The Boy, luckily, became sweeter once Lloyd switched to features like Safety Last!, Girl Shy and Speedy, which features of a scene of Lloyd taking Babe Ruth for a wild ride to Yankee Stadium in his taxi (The Babe appears to shit his pants during the ride).

For years it’s seemed like the popular opinion is that Lloyd is a distant third to Keaton and Chaplin, somewhere slightly above Fatty Arbuckle, but way above Charlie Chase and Ben Turpin. Personally, I find Lloyd to be a little closer to Keaton and Chaplin. The rough edge to his comedy and the insane danger of his stunts (Lloyd actually scaled the building and hung off of the clock with two missing fingers from a stunt that went bad a few years earlier) haven’t aged that much in the ensuing decades. But the truth is that they’re all great anyway, they’re just great for different reasons and for different moods.