Runaway bridesmaid: Julie Hermann and the culture of the cutthroat

May 30, 2013 at 1:34 PM
comment
Somebody help me with this, because I’m a little confused: Are Rutgers players still faggots, or are they now just whores?

Hermann, doing her crowd-pleasing "Senor Wences shames the sluts" routine. These days, that school’s athletic department is really The Gang That Couldn’t Motivate Straight. If the allegations against her are true, their new athletic director, Julie Hermann, has a history of player abuse that’s right in line with that of ousted men’s basketball coach Mike Rice. Rice’s infamous tirades against the “faggots” on his team appear to be of a piece with Hermann’s behavior when she was coaching volleyball at the University of Tennessee, where she allegedly taunted her players as “alcoholics,” “learning disabled” and “whores.” Oh, and she’s also accused of firing one of her staffers when the woman became pregnant. Hermann, it just so happens, had been one of the bridesmaids at the woman’s wedding. (Maybe we can get Wendi McClendon-Covey to play Hermann in the movie.) But before we strike a match to burn the witch, perhaps we should stop and ask ourselves why we find Hermann’s story so enthralling, and what deeper truths we might be using it to obscure. Now, let’s be clear: I’m not defending anything Hermann may have done. No coach should denigrate the young women who play for her as “whores.” That’s Don Imus’ job. And firing another woman for getting pregnant, after you yourself have been in her bridal party, is just cold.

You wouldn't want to bring THIS Rice to a wedding. With all that as a given, though, there’s something disquieting about the zeal with which the media is pursuing the Hermann story – particularly the bridesmaid-catfight angle. Unless I missed it, nobody was looking into Mike Rice’s past behavior at bachelor parties, if you know what I mean. Simply put, we love us a good Dragon Lady meme. Just as our few days’ worth of concern for the Cleveland kidnap victims was scooted off the front pages by yet more calculated ado over the Tsarnaev women and Hillary, so is Hermann acting as the straw woman for outrage that might better be directed toward our system of athletic competition as a whole – and maybe toward the ways in which we as a people have altered our perception of what counts as “acceptable” behavior when rivalry rears its head. I’ll admit that I may not be the likeliest person to discuss these topics. When I was growing up, sports just weren’t a very big thing in our household. Oh, we attended the occasional Mets game (which, I realize, technically doesn’t count as “organized athletics”). But mostly, we went to plays, movies and restaurants. On one such trip, while we were returning to the car, something caught my eye – seven words that had been scrawled, big and bold, on a nearby building:

COMPETITION IS THE FIRST STEP TOWARD ALIENATION

It stopped me in my tracks. I pointed it out to my Dad; he was transfixed, too. In fact, he ran to the car and got a notepad to jot it down, so he wouldn’t forget it. It was the kind of bonding moment some fathers and sons have while watching their favorite team win the Big Game (although, as I’ve established, the latter occurrence was not tremendously common for us as Mets fans). 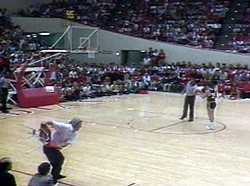 A Bobby Knight classic from ABC's "Wide World of Sublimation." “Competition is the first step toward alienation.” How those words have stuck with me through the ensuing decades. In that time, I’ve seen our national definition of “competition” perverted so grotesquely that it now seems to represent a kind of sickness – a self-loathing predicated on the idea that your personal potency depends entirely on your willingness to kneecap any poor bastard who might want the same thing you want. When I heard Dan Quayle, in a nationally televised vice-presidential debate, declare that he had learned about character from a chair-throwing psychopath like Bobby Knight, I knew we were down a rabbit hole when it came to enshrining the antisocial. Suffice it to say that things have not gotten better since then. That’s why I find it hypocritical that we should paint any one official – a woman like Hermann in particular – as a shrewish anomaly within a competitive culture that thrives on browbeating, both verbal and psychological. Think of how often controversial coaches are defended via statements like “He’s a son of a bitch, but he wins games.” That isn’t a “but” statement; it’s an “and” statement. We have allowed competition – in sports, but also in life in general – to run so dangerously amok that humiliation is practically its fuel. I have my doubts as to whether any team could now remain “competitive” if its players were not reminded regularly that their very value as human beings – as sexual beings in particular – hinged on the outcome of the next game. Yet we wonder why coaches, players and fans alike tend to act like animals. We wonder why male teams commit gang rape to blow off steam. We wonder why drunken fans pour out of sports bars and beat the snot out of anyone who looks femme or foreign. We wonder why somebody like my former downstairs neighbor can state with a straight face that she should “know better” than do anything that might further irritate her boyfriend on a Sunday when his team has just lost. And while we put on the Alfred E. Neumann face over our collective brutishness, we certainly aren’t acknowledging its impact on the issues that really matter -- like our notions of proper corporate conduct or justified warfare, to name but two. We look at all of this elective, absurd pathology and decide it’s simply the price of freedom. Which, we long ago forgot, is not the same thing as “winning.” Personally, I’d rather go home on the losers’ bus, with the faggots.