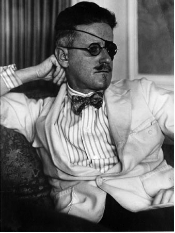 What would James Joyce do on Bloomsday? Probably go to Drunken Odyssey’s “Bloomsday Reading”

For those of us fortunate enough to live in sunny Orlando, we also find ourselves equally unfortunate enough to not live in cloud-covered Dublin, especially on Bloomsday, an annual celebration of beloved Irish writer James Joyce and his celebrated epic, Ulysses.

Traditionally, the day’s festivities include readings of Ulysses and reenactments of the novel’s events, which occur on none other than June 16, 1904. And no reasonable Irish holiday is complete without – you guessed it – getting wasted. So naturally, Dubliners spend the day venturing from pub to pub, in the good name of literature and patriotism. What else?!

So now that we’re all feeling pretty unfortunate about not being in Dublin on Bloomsday – because who wants to miss out on costumed Irishmen parading between bars all day, reciting early 20th century prose? – the luck of the Irish comes our way. Fortunately for us, this Sunday, June 16 (at 6 p.m.) marks Orlando’s second annual Bloomsday celebration. John King of the "Drunken Odyssey" podcast brings Bloomsday to the Gallery at Avalon Island in downtown, for a night filled with “the

uncensored sensations of Dublin in 1904.”

The event gathers writers, literary buffs and fun-seekers alike for Orlando’s very own Ulysses reading. Patrons looking to feel especially Irish for the Bloomsday bash might want to consider a pre-party spot at the Celt Irish Pub just next door.

And even though we don’t have the good fortune of celebrating Bloomsday in full-on Dublin fashion, at least we get to celebrate in our often bemoaned, but secretly much-appreciated Florida heat and sunshine.