Over the weekend director Jamie Benning released his latest "filmumentary", unofficial feature length documentaries that traces the production of films like Star Wars and Raiders of the Lost Ark by using interviews, deleted scenes, alternate takes and on-screen infographics built around the film itself. It creates a good sketch of how and why certain things made it into the film while other things didn't.

His latest film takes on the notoriously difficult production of Steven Spielberg's Jaws on Martha's Vineyard in the spring and summer of 1974. Over 2 1/2 hours, Benning spills the beans on Robert Shaw and Richard Dreyfus's ongoing set fueds, Spielberg's angst about the shark not working, and features original interviews with some the islanders and summer dinks who helped make the film become a reality.

Jaws has long been a bit of a thing for me -- when I sat down last summer to write a 200 word screening notice, I ended up writing a 1,500 word essay on the film instead -- so it was a real treat to get to see Jamie's film and talk to him about it.

You can catch Inside Jaws and Jamie's other films for free online at this website, filmumentaries.com.

Orlando Weekly: Hey Jamie, thanks for doing this.

OW: How did you come up with the idea for the filmumentary?

JB: I just thought that the DVD extras were lacking something. I knew if I put my mind to it I could accomplish something better. There are so many resources out there to tap into.

OW: What is your background in filmmaking?

JB: I made one short spoof 'making of' at university. Apart from the filmumentaries, that's the extend of my film making. I started doing these projects back in 2006 with a series about the original Star Wars trilogy.

OW: You seem to come to film naturally for having not studied it. What did you study in University?

JB: Well I studied media production at university but I don't think that has much to do with it. The course was a shambles. The only part of it that was worth anything was the certificate. I am a huge film fan though and grew up during an amazing time. 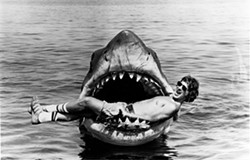 OW: Was there a story that you discovered in your research that really surprised you about Jaws?

JB: I loved Kevin Pike's unique entry into the film business. Kevin was working as a bus boy when the Jaws production design team came in to the restaurant. As they left they forgot their attaché bag, which contained dozen of Jaws storyboards. Kevin kindly chased them down and ended up talking his way onto the film working as a labourer. Amazing.

I got a real buzz talking to Kevin, Rita Schmidt and Tom Dunlop on the phone and hearing their great behind the scenes stories.

OW: Even with the feature length running time of the film, plenty of interesting stuff has to be left out. What was your favorite Jaws story that didn't make it into the final cut?

JB: There was plenty I couldn't find space for. I rather liked the one about production designer Joe Alves assistant breaking into the local hardware store for paint. They eventually just gave him a set of keys.

OW: So, of the five filmumentaries you've done now, which are you the happiest with?

JB: My Raiders one is up there as it was a real challenge to get the material together. It was also the first time I'd conducted my own interviews.

OW: Being so immersed in these films for so long, have you managed stayed in love with them?

JB: Absolutely. It gives me a whole new perspective about the story behind the film. I'm very lucky in that I can still watch the films for what they are too.

OW: The feedback for all five films seems to be overwhelmingly positive from fans, but has anyone from Lucas or Spielberg's camps contacted you?

JB: The feedback has blown me away. I love that there are so many people like me that want to see this style of 'making of'.  I did hear from an ILM employee via a contact a couple of years ago but he didn't reveal his identity. He did say that he and his colleagues were getting a real buzz watching Star Wars Begins.

OW: Any thoughts on if you'll continue doing these?

JB: I'd like to but they are pretty much all consuming. I'd love to be asked by a studio to work on something official. The money wouldn't matter, I'd just do it for the love of it.

OW: Any thoughts on the next film to tackle?

JB: Back to the Future, Ghostbusters, The Shining.  I always have ideas floating around.