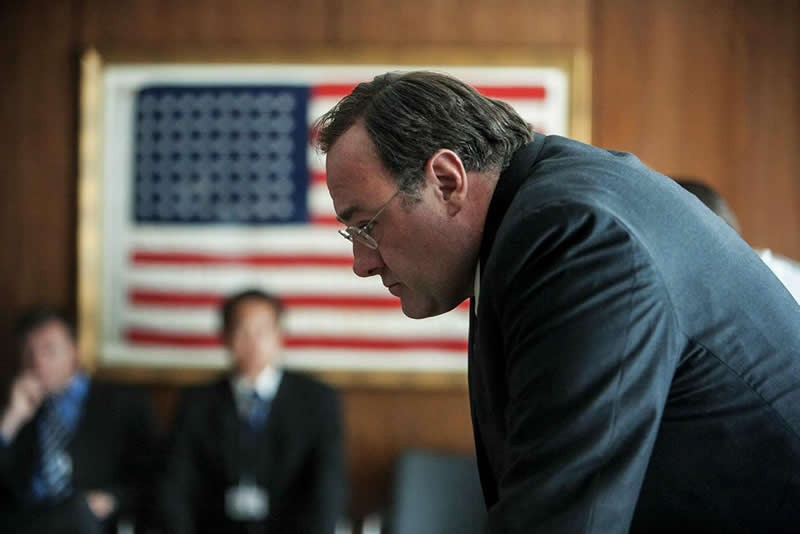 I was about to go out and already had my headphones on when my uncle went to tell me something about James Gandalfini. Music wasn't playing yet, so it was all muffled, but even when I took the headphones off I still had to say, "what?" again, because the words just didn't sound right. How could he be dead, I just finally got around to watching him in Not Fade Away and Killing Them Softly, and had working through reruns of The Sopranos on HBO Signature for the last few months.

Of course that's not how film works, but brains tend to operate at quarter capacity when something really shocking happens, like a man you've spent as many hours watching on your TV as you have hanging out with friends. Though he had the range to play an array of different characters in film, on TV and on the stage over the years, it's always been his presence that made the scene. Most actors as in the frame, James Gandolfini occupied the frame, always. There is this scene in Where the Wild Things Are, which illustrates the point I think.

Even though it was only a voice role, there is never a static moment in his performance of Carol, the biggest of the wild things. It's a clip that shows off both his presence and his range. He's plays the whole array in this scene. Childlike, protective, resigned, dejected, powerful. Maybe its because his presence as Tony Soprano already occupies our mind, but in this scene (in the whole film), his voice can occupy the frame without the help of his body. You feel it as much as hear it. The scene never plays like he's standing in a booth recording it. It feels like he is walking next to Max Records the entire time, feeling the heat, tired from the long walk; you can feel him looking at the sun, and sees his wheels spinning as he looks at the sun (credit to the Henson Puppeteers too, of course), trying to figure it out. Anyway, that's what I thought of. He might've ended up a little bit typecast as the big tough guy with a soft touch, but it's just such a big loss that it's hard to actually believe.

-Someone found this NYT article about the life of apartment hoppers in NYC in the late 1980s when Gandolfini, whose "calling was the theater," still made most of his money from bartending and construction. (NY Times)

-Christopher Nolan didn't like the end of Man of Steel either. (Moviefone)

-Aaron Sorkin's The Newsroom is back for it's second season, and it's got some high profile consultants this time (the absence of consultants in season 1 is something I wrote whined a lot about last year). (THR)

-It's Sam Taylor-Johnson (formerly Sam Taylor-Wood) for director of the 50 Shades of Grey adaptation. It's something I wasn't interested in before, but probably am now with her involvement. (Guardian)

-The six Pixar sequels we missed out on. Whew. (mental_floss)

-Speaking of Pixar, one of the characters in Monsters University, Dean Hardscrabble, changed genders at the last minute. (Buzzfeed)

-Some kind of fucked up (but kind of funny too) excerpts from the new book My Lunches with Orson: Conversations between Henry Jaglom and Orson Welles by Peter Biskind. (Dangerous Minds)

-Just leave the cache of E.T. Atari games buried where they belong. That's where they deserve to be. (NY Times)

-An interview with Christopher Blauvet, who replaced Harris Savides on The Bling Ring when Savides became sick, eventually dying during the film's post-production. (film.com)

-How much did Paris Hilton know about the break ins before she saw the film? Apparently not much. Because, yeah. (LA Times)

-A bio on the real theives. (LA Times)

-The art and history of the movie trailer, from the 1940s until today. (Wired)

-The first trailer for The Spectacular Now, with Shailene Woodley and Miles Teller. (Twitch)

-The Crystal Fairy trailer with Gaby Hoffmann and some canadian dork... Michael Something, with  a C. (IndieWire)