8 insanely dated education and propaganda movies made by Disney 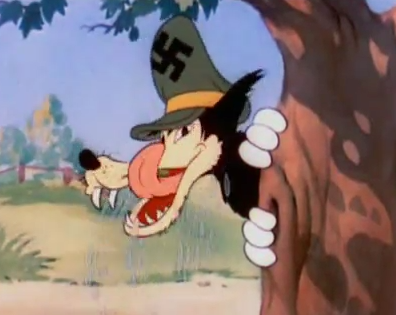 Disney wasn't always solely affiliated with happiness and light – in fact, a big part of Disney's history has been its educational fims, which ranged from hygeine films to wartime propaganda to science movies for the public. Here are eight of our favorite super-dated educational films Disney's ever made.

8. "The Thrifty Pig," (1941) in which two lazy little pigs fail to fortify their weak homes and end up being terrorized by the big bad Nazi wolf who sends them scurrying for assistance from the one wise pig who bought War Bonds, and therefore has a very sturdy home that the wolf can't break into.

7. "Der Fuehrer's Face," starring Donald Duck (1943), in which Donald Duck has a nightmare in which he's a Nazi worker.

6. "Crack the Big Lie, (1980s) an anti-drug film in which a teenager thinks it's kind of hilarious that all of the adults around him are so frantically opposed to cocaine and crack.

5. "The Winged Scourge," (1943), a film about how evil mosquitoes spread malaria and destroy productivity.

4. "Hitler's Children," (1941), which explains how kids in Germany were trained to become Nazis from birth

2. "Tommy Tucker's Tooth," a 1922 silent film about hygeine that focuses on a kid named Tommy who thought brushing teeth was only for girls.