And the kicker: It's in Florida. (OF COURSE IT IS.) So of course, yuck, etc., but just a few things to keep in mind —

1) To be fair, Golden Corral restaurants are franchises, so even if it's accepted policy to leave raw meat in the blazing sun for hours at one Golden Corral, it doesn't mean they all do that.

2) It seems pretty clear that this guy just wants to be the YouTube flavor of the week — it's kinda hard to believe that any restaurant would store food this way at all, but during an inspection? um, what? (NB: Golden Corral has issued a statement saying all that food was thrown away and the employees in question were fired.)

3) For the love of God, YouTube videographers, HOLD YOUR PHONE SIDEWAYS so we don't get those stupid black bars on the sides; and,

4) This is the risk you take if you make low price your top priority when eating out. Cheap plates = corners cut — maybe not like this, but definitely in some way that you aren't seeing but wouldn't like. 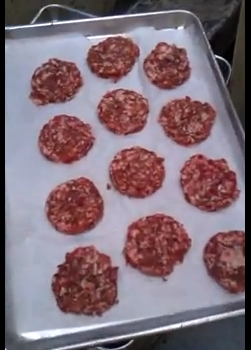