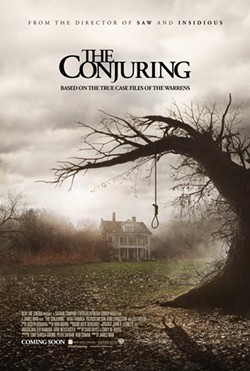 I usually dread most modern mainstream horror efforts. There's just a formulaic soullessness to them, and you can almost picture the producers pacing around meetings, trying to figure out how much integrity they could sacrifice in order to make the largest amount of money. That's not to say that making money is a bad thing---that's why businesses exist, after all. But it oftentimes seems that horror is thrown under the bus for more burn-and-churn cash-ins than any other genre on the planet, and it's tough to find a piece that doesn't look untouched by human hands. It's a personal gripe, and I'm owning it.

Luckily though, we have James Wan. This little moneymaker kick-started the Saw franchise, Insidious (now also a franchise), and has recently been assigned to the strange task of directing the seventh Fast and the Furious movie. What gives this guy the Midas touch? I'd say it's his uncanny ability to take a fantastically-nonstop dramatic situation, and give it a human touch before it crawls too far up its own ass (Michael Bay, are you reading?...Of course not). He takes artful chances, but not too many as to alienate his audience. Wan doesn't want you to think very hard when you're sitting comfortably in your squishy chair inhaling Sour Patch Kids, and he knows how to play the game. His producers know it, and the rest of Hollywood knows it. In that, he's a director worth watching and respecting, even if his works aren't always as timeless as they could be.

Enter The Conjuring, his latest and greatest horror effort based "loosely" on actual experiences of the Warren family: a ghost-hunting husband and wife team from the 1970s. After a plea from a distraught mother (the always-comes-to-work incredible Lily Taylor), the couple agrees to help exorcise their new home of the spirits plaguing their family. The rest is a sandbox of creaky doors, haunted music boxes, possessed dolls (what's up with Wan and dolls?), and confidently-eerie atmosphere for days. By the 75% Mark, the house is not only filled with a large suburban family, two ghost hunters and a handful of spooky spirits, but they decide to throw in a cameraman and the local "skeptic police officer" for some extra color. It's at this moment the movie turns from "isolated and terrifying" to "thrilling and interesting". The tonal shift isn't necessarily a bad thing, and it's not at all intrusive, but it's there and worth noting.

The Conjuring, this funhouse, is like a song with a million hooks. Whenever you feel one kind of scare has been done to death, Wan drops a new coat of paint on an old leg of the formula, reveals a bit more backstory, and you're back on the frontline fighting for the Perron family again. It isn't new for a horror flick to showcase a happy home life slowly being consumed by the spirits haunting it, but this movie doesn't simply want you to sympathize with this tortured family, it wants you to empathize. It wants you to feel how terrified two little girls can be when waking up to a living shadow staring at them from the dark side of their bedroom door. It wants you to feel a mothers fear when she walks into a room and sees her sleepwalking daughter violently pounding her head on the side of an old wardrobe, and panic when your candle burns out in the middle of a air-tight basement a moment after you realize you're not alone. That's The Conjuring.

Without a doubt, this is Wan's most accessible horror romp to date, and a shining example of how to intelligently play it safe while giving any audience something to shiver about as they fall asleep. It isn't the second coming of The Amityville Horror, Poltergeist, or The Exorcist many we're hoping or claiming it would be, but it does a wonderful job of expanding upon many of the classic frights those films established so many years ago. In an endless sea of desperate blockbuster horror, this one, while not necessarily a departure, feels like it has its head on straight. Shut up and take my money.