The one weird trick this local woman discovered to lose weight fast! The Orlando Sentinel wants you to pray away the love handles 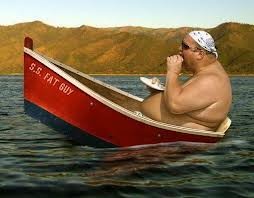 The Orlando Sentinel—either because they’ve run out of actual news to report, or because we’re a city of Ho Hos-eating fatasses who believe chatting with Our Imaginary Friend burns calories and you’ve got to give the people what they want, or both—ran this story on its front page this morning: “Prayer helped Lasheka Mack lose 88 pounds.” (The print headline was “Faith helped woman shed pounds.”)

Prayer—not eating a salad or ambling around the neighborhood once in awhile. Prayer did it. On the front page, alongside such stories of import as “New prince meets world” and an ad for the Transformers 3D ride.

Our Paper of Record is doing nothing to dispel the notion that Orlando is chockablock with rubes.

For those who hit the paywall, here’s the lead:

The road to weight loss usually starts with a wake-up call.

For Lasheka Mack, the moment came as a thunderbolt from the pulpit. Seven years ago while sitting in church, she heard a sermon that did what no weight-loss program had done before. The message inspired her to lose the extra 80-plus pounds she had carried around most of her life.

The Orlando resident's experience confirms what studies show: Religion can be a powerful weight-loss tool.

Two quick thoughts: 1) The lead says “studies” prove that religion causes weight loss. The story mentions only one study, this one, which is tailored to a very specific segment of the population (black women), and says:

Although the results were not statistically significant, the effect size suggests that the addition of the faith component improved results. These promising preliminary results will need to be tested in an adequately powered trial.

Allow me to translate: The slightly improved weight loss these black women saw, which may not actually mean anything because this experiment had a small sample size, has nothing to do with the Almighty and everything to do with culture.

2) If you actually read the story, you learn—as you probably suspect if you are not brain dead—that Lakesha actually lost weight because of diet and exercise. Lakesha cut out fried and processed foods and red meat. She went to the gym. She drank nothing but water. These are all very good things, and if you do them you will probably lose weight, whether you’re Christian or Jew or Muslim or Hindu or Buddhist or Zoroastrian or Pastafarian (ramen). Maybe—just spitballing here—even if you’re an atheist.

Lasheka’s weight loss is impressive, and she should be proud of it. If she found motivation in religion, good for her. Whatever works. But let’s not pretend that the Lord did it. And our newspaper shouldn’t be pretending that he did.