Warlocks rising or Discovery Channel sinking to a new low? 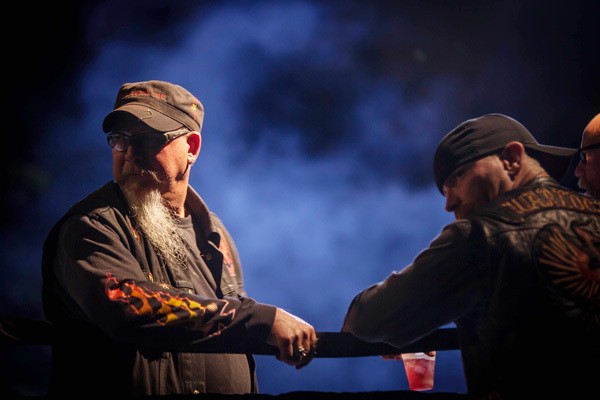 In my original post about the first episode of Discovery Channel’s epic failure of a miniseries Warlocks Rising, I claimed the show was required viewing for Floridians, and my reasoning for this was, “the more you know, right?”

Well, it turns out that if Discovery Channel learned anything about the underground subculture of Florida biker club the Warlocks, they definitely weren’t letting the viewers in on it. Instead, the reality series had a sincere disconnect between its teasers (Violence! Drugs! Death!) and what it delivered (None! Of! These!), to the disappointment of anyone who raised an eyebrow at what they claimed the show would be. Each episode brought along boring tangents, non-club business and a lot of incidents that frankly seemed staged.

If you didn’t watch the series, consider yourself lucky. I’m about to give away a bunch of spoilers, but really, the show spoils itself by trolling Floridians and those intrigued by biker clubs and masquerading as genuine Warlock material when, really, it’s cut from the same cloth as SEO copywriting. Thankfully, I’m not the only one who felt this way, as you’ll see from the Twitter reactions I’ve interspersed in the reviews, which I was able to track with DC’s helpful #warlocksrising marketing prompt.

Let’s start this off by not pretending that Contender is the star of this show. Slob obviously steals the show, and more than that, his wife Kimmie is maybe the most authentic-seeming person on the entire show, and I’m not just saying that because I know how her story ends (sort of). In this episode, Slob gets in an accident, and the Warlocks have to track down the guy who hit-and-ran Slob. They say multiple times that “nobody hits a Warlock and walks away from it,” we spend a whole episode waiting to find this mysterious assailant, only to have it be a cowering biker who is barely intimidated, whose word they take instantly that it was an accident. And he walks away from it. Who are these lazy Warlocks who talk so much vengeance but can’t even confront a man with Slob’s blood on his bike? I’m not bloodthirsty, I swear, I’m just baffled. Ridiculously weak.

We also learn a new word, “hangaround,” which is someone who puts in their time making friendly with the bikers until they vet the person for membership. This episode’s hangaround is Nate, and even though they find incriminating evidence that suggests he might be a cop or be interested in becoming a cop – and even though they say the Warlocks have been taken down twice by undercover cops posing as hangarounds – their solution is to send Nate 100 miles away and let him continue snooping on the club there. Why? I dunno, and neither do you, becauseZZzzzzZZzzZzz.

In the midst of Orlando hospitals and hangarounds, Phil Z. (who is only endearing when asking his toddler son if he wants to go to a nudie bar?) seeks to open his own bar, and we waste even more time watching a shady dude do things other than be a Warlock for the rest of the episode.

We also find out Slob likes pedicures, he’s never owned a colored bike before this show, and he doesn’t think he wants to be a Warlock anymore.

So, halfway through the miniseries, we have two guys who are clearly not 100 percent 1-percenters, and neither of them is actually rising to any of the occasions put in front of them.

Oh, goodie. The Warlocks are looking for a legit way to make money, and their answer is moonshine. After a goofy scene involving a giant pig who refuses to drink their product, they feed the liquor to their brothers, who also flat-out refuse to drink the “Warlock whiskey.” This leads them to the novel idea of asking an expert for tips and recipes, and the whole episode takes a turn toward Martha Stewart until these Florida good ol’ boys show up, start some trouble, and suddenly, we have Warlocks in the woods, guns are involved, but again, it is reiterated until your eyes roll all the way back in your head: This is not official Warlock business. So yet again, we are following around people who don’t want to be Warlocks doing non-Warlock things.

But it gets WORSE. The episode next goes into ABC Family territory by having Contender’s brace-faced daughter going on dates with this pimple-faced college guy, complete with beer pong and popped collars. (OK, maybe not popped collars, but c’mon.) Their love story ends with what we as viewers can only assume is off-camera violence as the Warlocks ride up on the date-guy’s house, then we hear sounds of shattering and shouting, but for all we know, it’s just Discovery Channel execs banging on pots and pans.

Most pointless clip, however, goes to Phil Z.’s surfing cameo.

This last episode is the fraudulent icing (aka fondant) on the cake of this whole hair-tease of a biker pageant, and while I again really liked Kimmie and thought she was a champ during her bridal shop staged scenes, the focus of the final episode wasn’t on her sad news or her vow renewal, but instead, it was about

I couldn’t even believe how many times Troy mentions in this episode how the Bad Man contest is intended to be good PR for the Warlocks club. What is the point of being a 1-percenter if you actually care what the other 99 percent thinks of you? And how am I not supposed to then make the connection that this entire TV show is about good PR for the biker club? Is this real life?

The answer is no. And I’m pretty sure the tortoise thief wasn’t real, either, and while it was sad that Slob’s house burned down at the end, I didn’t shed any real tears, because there was little to be discovered by watching this asinine reality show, other than that maybe DC has lost some of its magic when it comes to original programming.