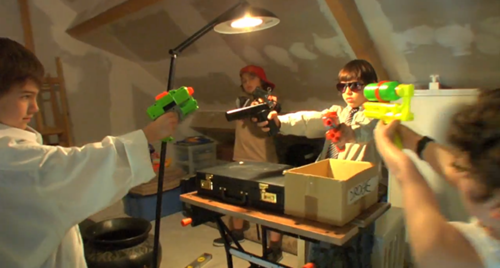 "The Greeks" by Is Tropical Dir: Megaforce (Animation by Machine Molle) Runtime: 3.5m Album: Native To Watching kids getting shot in the face and having their throats slit during drug buys has never been more completely adorable than in Is Tropical's live action-animation hybrid that substitutes little kids for gangsters and drug runners in a video not unlike The Beastie Boys' Sabotage. Some will say this is horrible and corruptive, but this is certainly what we were thinking of with our Nerf guns and Supersoakers, the animation only adds what we used to have to imagine as kids. http://www.youtube.com/watch?v=QwrbyVaC6EU

"The Suburbs" by Arcade Fire Dir: Spike Jonze Runtime: 6m Album: The Suburbs The video for Arcade Fire's The Suburbs is the literal embodiment of this SFF installment: it was cut together out of pieces of a longer short film Jonze and the band had concocted called Scenes from the Suburbs, about a near future suburban dystopia that runs parallel to most of the grammy-winning album, where neighborhood battles neighborhood and neighbor battles neighbor. The full short film is available on the special edition version of The Suburbs (the one with the red cover). http://www.youtube.com/watch?v=5Euj9f3gdyM

"The Unforgiven" by Metallica Dir: Matt Mahurin Runtime: 12m Album: Metallica (aka The Black Album) Staying with the theme of fucked up childhoods, we move swiftly into the what-the-fuck-was-that-about territory that Metallica staked out with their long video for their first take on The Unforgiven. Once upon a time this was the rarest of rare things, airing once on a Metallica special on Mtv and not, to my knowledge, ever again. The WTF factor is extremely high in this theatrical version of the video, and even Metallica themselves seem to have had no real idea what Mahurin was saying about youth and age and emotional and physical imprisonment told through an array of black and white images. http://www.youtube.com/watch?v=YwEsPizQVNc This one also has a sequel: http://www.youtube.com/watch?v=5bt7kAVxKfs