The eloquence of the lambs: How to listen to the Cleveland women 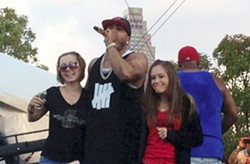 I always wondered what happened to Catherine Martin.

You remember Catherine: She’s the senator’s daughter who was kidnapped by Jame Gumb in The Silence of the Lambs. She’s an interesting character – plucky and determined to survive. At one point in the story, her mother appears on TV to plead with her abductor to spare Catherine’s life. Clarice Starling, who is watching the telecast, remarks on how clever it is that Senator Martin keeps repeating her daughter’s name. It is, Clarice recognizes, an attempt to reinforce for the kidnapper that Catherine is a human being, and not something disposable.

Ironically, the movie ends up treating her as just that. After Clarice defeats Gumb, all we see of Catherine is a single, fleeting shot of her being led wordlessly from Gumb’s house of horrors. The movie’s denouement provides closure for just about everybody else: We see Clarice graduate from the FBU academy, and we see her informant Hannibal Lecter saunter down a Bimini street to take revenge on his own enemies. But whatever adjustment issues Catherine may be facing after her ordeal are left entirely to our imagination.

"And now I'd like to address the issue of my gluten allergy."

This week made it clear that the Cleveland captives are not going to be Catherine Martin. Michelle Knight’s jaw-dropping testimony at the sentencing of Ariel Castro was only the latest in a series of public appearances that have been remarkable in their visibility. There was the strikingly upfront YouTube video that Knight shot with fellow abductees Amanda Berry and Gina DeJesus; even more surprising was the sight of Berry standing alongside recording artist Nelly at an outdoor music festival sponsored by Cleveland’s WMMS, smiling and drinking in the crowd’s well-wishes.

Our news outlets, I’ve noticed, haven’t quite known what to make of these sightings. On the one hand, they make for great coverage, with strong visuals and plenty of opportunities for talking heads to coo over the women’s “strength.” But I’ve also detected a palpable undercurrent of – okay, I’ll just say it -- disappointment in the media’s presentation of these stories, since they problematize the conventional wisdom we’ve been fed about the Cleveland trio since they got free. Since that day, the “expert” commentators have been warning us that Berry, Knight and DeJesus face a long road to reintegration into society, with plenty of therapy and tears assured. I don’t think I’ve seen one story about the women that hasn’t come with a similar caveat. You can almost set your watch by it: Footage is shown of Berry at RoverFest, the anchor proclaims the sight inspiring and moving, and some armchair psychoanalyst immediately butts in to remind us that, beneath the surface, all three women must be raw nerves of anxiety that are going to take years of professional care to smooth out.

I don’t doubt that the adjustment period these three human beings are facing is a daunting proposition. I also can’t miss the flop sweat on a Wolf Blitzer’s brow whenever one of them exceeds her expected capacity for bouncing back. Somebody’s damsel-in-distress narrative is getting threatened here.

And really, that narrative has been in force since the minute Berry escaped. America was quick to proclaim Charles Ramsey a hero for the crucial role he had played in spiriting Berry away from Castro’s house, and rightfully so – what Ramsey did took courage and an instinctive loyalty to humankind. But it’s important to remember that Ramsey didn’t “rescue” Berry, as the thought was so often parsed: He helped her complete an escape attempt she herself had initiated. If there was a real hero in that situation, it was her. After years of unimaginable torment, she had leaped fearlessly at the chance to not only secure her own freedom but save the lives of her housemates – including the child she had been forced to bear by the very monster who had imprisoned them.

In her 911 call, Berry said something a professional scriptwriter couldn’t have surpassed: “I’ve been missing 10 years. I’m here. I’m free now.” By now, those words should be on their way to enshrinement among the most iconic statements of indomitable will America has produced. Instead, they barely became a meme. I guess they just don’t sound like something Rapunzel would say.

"Yeah, I think that about covers it."

The righteous testifying continues anyway. Knight’s courtroom statement may have been the most awe-inspiring talk-to-the-hand moment our culture has witnessed since

well, since Whoopi Goldberg put the evil eye on Danny Glover in The Color Purple. Even more significantly, it was delivered directly to the man who had made it necessary. The same man who, in his own statement, argued pointedly that the current presence of the women on the national stage “proved” he couldn’t have treated them that badly.

Our nation’s news analysts won’t like me very much for saying this, but that idea is a funhouse-mirror reflection of their own discomfort at dealing with the idea of a defiantly uncowed survivor. Both attitudes are based in a paternalistic notion of victimization – the belief that a woman does not do, but is done to.

So I hope Berry, Knight and DeJesus keep surprising us with their refusal to be bound by anybody’s stereotype. If they decide tomorrow that they’ve had enough of the spotlight and want to be alone with their thoughts for a while, then God bless them. But I’d kind of love it if they stuck around, popping up on all channels when they felt they had something to say. Or being caught by the kiss-cam at an Indians game. Or even presenting a statue at the MTV Movie Awards if they thought it might be a hoot. Whatever they want to do, they’ve earned it as far as I’m concerned – not just because of what they went through, but by the example of sheer unsinkability they’ve set in the aftermath. Listen up, kids: Living well may be the best revenge, but partying with Nelly is an even better way to say “fuck you.”

In some obvious ways, these women have a lot of catching up to do. In other ways -- ways less overt but just as important -- we have a lot of work to do to catch up to them. After 10 years in that awful house, the last thing I want is to see them imprisoned within our own narrow expectations. And they don’t have to be. As a wise woman once said, they’re here. They’re free now.

Days without a response from the publication that plagiarized from me and won’t come clean: 46.