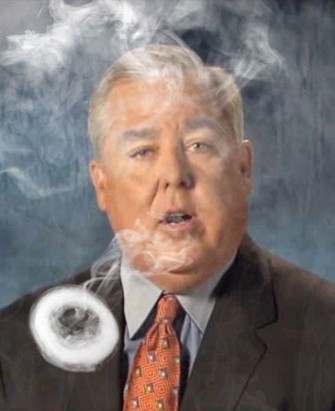 Take all of this with a grain of, well, you know, but something seems to be afoot in the United for Care/People United for Medical Marijuana push for petitions to get the (sorta) legal weed on the 2014 ballot. And, hey, that would suck, right? In this week's Happytown™, we addressed some concerns currently being lobbed about by libertarian/conservative consultant Roger Stone – though most of Stone's concerns revolve around the hypocrisy of Charlie Crist on the drug issue, some of them paint their bull's eye right on the head of Morgan & Morgan millionaire attorney (and boss of Crist) John Morgan. Morgan, claims Stone, has morphed the whole campaign into a private club for liberals who love Crist, while, in Stone's belief, "This cannot be about partisan politics or it will never get done," he says in an email this afternoon. Anyway, that's all big picture stuff, and the sort of political cage-rattling you expect in in These Divisive Times.

But then something peculiar happened. Even though we ran into Mike Morgan, John's son, last night at an event with adult beverages – and even though the young Morgan said that, to his knowledge, the campaign was moving along fine, except that gathering petitions statewide is "hard" (we've heard solid estimates of 10 percent of the 700,000 required gathered already) – we started hearing today that the petition campaign has been suspended.

Our first anonymous tip went something like this: "I was working the petitions and I received an automated phone call saying they're suspended. I called the person in charge of the Orlando office and she told me that John Morgan backed out. She also said it was most likely an indefinite suspension since he was the main backer." Oh, really?

We phoned up Orlando campaign coordinator Deborah Banks, and she verified that yes, as of last night, the campaign had been suspended (she also started talking about having to pull an advertisement and get refunded or something, but we don't even have a wallet). Peculiar!

We (again) reached out to every known number we have for John Morgan and left messages, but still haven't heard back. We put out an email to our new friend Roger Stone and he said, "I have heard this also – trying to confirm. I am working on bipartisan legislation to be introduced into the legislature for the next session."

Then we called up Mike Morgan, just to see if maybe we had a few too many greyhounds last night, and might have misunderstood "fine" for "over" in regards to the campaign. He hadn't heard anything, but promised to get back to us.

BUT!!!! Here's the thing. Back when we first talked to John Morgan about his involvement with the campaign a few months back, he mentioned that he planned to utilize a petition-gathering agency from Las Vegas to bolster local grassroots petition gathering, so maybe this is just the part where the grassroots get the Round-Up? Anyway, we'll keep you updated as we he hear more. For now, hunker down and light up.

UPDATE!!!! We just finally heard back from John Morgan, and he is basically saying that the whole thing is a sort of misunderstanding? Perhaps it's just the paid petition signers that are being suspended. Anyway, here's his message:

"Not true at all. We have collected 100K signatures. We need 60K to be reviewed by the Supreme Court," Morgan writes. "We are being overwhelmed by volunteers who will collect. Once we have the ruling, we may or may not need to hire paid gatherers. I start a huge advertising campaign soon on radio in Florida seeking volunteers this is so important and people are so enthused that we may be able to do it all with volunteers who will then help us get out the vote. So we are in great shape."

Oh, and also some choice words about Stone (NATCH), and a reminder that we apparently never empty our full voicemail inbox. EVERYTHING'S FINE!