KISS at the Amway Center ... reviewed by an 11-year-old 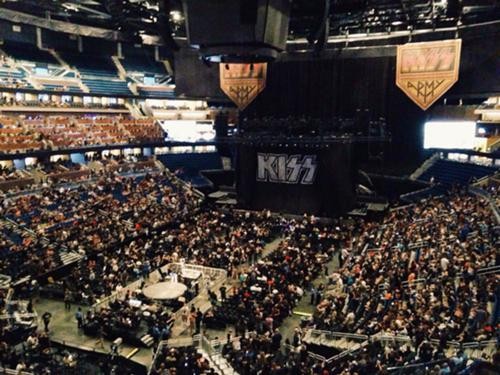 Note: I've been fortunate to take my kids to concerts for a while now, but my 11-year-old was especially stoked to see KISS in concert, so we hit the Amway Center on Aug. 16 (the band's opening show for the Arena Bowl). Originally, I thought it would be fun to have us both review it – old music snob vs. enthusiastic young fan – but after he wrote his review, I didn't see any need to add anything to it since it's kinda perfect (OK, I'll add something: the opening band really was pretty good, but would have been better at Will's Pub. And also: Paul Stanley just looks weird now and Gene Simmons drools a lot. Anyway, here's a review of KISS at the Amway Arena, written by Nolan Ferguson:

From the beginning of this rock concert, I had made the assumption of "This is going to be just like other concerts I have previously been to." But it wasn't. There was fire and lights and and even a gargantuan metal spider which most of the KISS members rode onto the stage.

The first band was a bunch of guys from London, England which had been touring with KISS. Their band seemed like some guys who just rocked until they told the audience where they were from. The band's name was Leogun.

KISS had recently let out a new album - Monster. It would have probably been a stampede on KISS if the security guards hadn't been there. They had been advertising multiple things such as KISS Mini Golf, The KISS Kruise, and even a wedding chapel with their motto - "Weddings that-ROCK!!"

When KISS came out it was like a dream seeing them all, KISS being my favorite band. They played multiple songs sweating their hearts out as they played their rock.

As I watched them rock, popcorn butter drizzled down my chin. Spaceman (Tommy Thayer) took out his guitar and blew fireworks. Catman (Eric Singer) joined in. As we left, the song "Dr.Love" was stuck in my head.