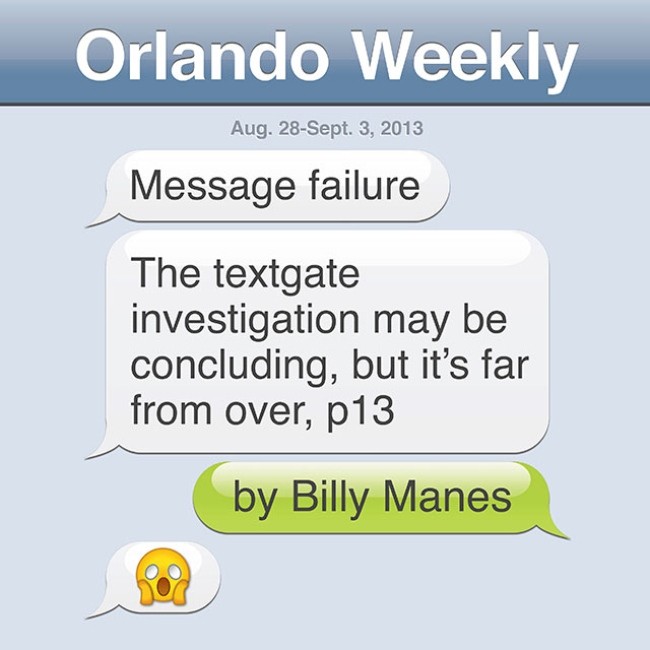 OK, so here goes. Jeff Ashton's office just released its findings on Textgate: “My conclusion, therefore, is that these text messages were public records and could only lawfully be disposed of pursuant to statute.  The statutory procedures in this case were not followed and, therefore, all of the officials who deleted text messages related to this issue violated Florida law.”   “Violation of any provision of the statute, regardless of intent or knowledge, constitutes a civil infraction punishable by a fine of up to five hundred dollars.  It seems very clear to me this is the correct statute to apply and the correct punishment to seek in response to the actions of Mayor Jacobs, Commissioner Boyd, Commissioner Brummer, Commissioner Thompson and former Commissioner Martinez.” That may sound like tough language, but basically it isn't. The report in full declares that nobody really broke the law, they just took direction from a "citizen," local Republican leader Lew Oliver (who is unnamed in the report). Organize Now director Stephanie Porta responds thusly: "Today, the state attorney reaffirmed what the courts and the citizens already knew -- these commissioners colluded with corporate special interests like Disney, Olive Garden and Red Lobster to thwart the will of voters by refusing to put an Earned Sick Time referendum on the ballot. Commissioners tried to conceal their collusion but they got caught. These politicians are supposed to work for us, not their campaign contributors. When they don't there should be consequences. Sadly, these politicians will hardly get a slap on the wrist for violating the public trust. When elected officials have a get out of jail free card nothing will ever change." Attached is the full 6 pages of Ashton's reasoning. An FDLE report will be released later today. Stay tuned for more coverage after the 3 p.m. press conference.