The consequences of doing nothing: Syria, Kristallnacht and the case for humanitarian intervention 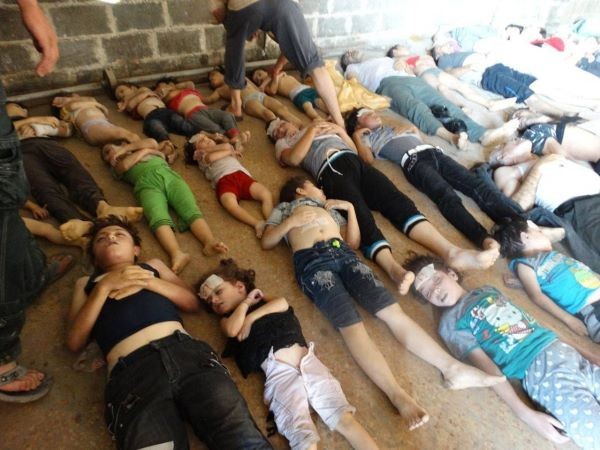 These children were some of the victims of the chemical weapons attack in Syria.

So far today the White House has announced pro-marijuana, -gay marriage and -gun control policies. Which means, of course, that we’re about to bomb Syria.

I feel like that should bother me a lot more than it does. I know all the reasons bombing Syria is a terrible idea: We’ll kill innocent civilians while punishing a country for killing innocent civilians. We’ll antagonize Russia and perhaps escalate regional conflict. We don’t have U.N. authority, which may make action illegal under international law. (UPDATE: Britain’s out, too.) We don’t have congressional approval, which may make action illegal under American law. (It is, however, somewhat amusing to see Republicans who were gung-ho under the Bush administration become born-again pacifists). The polling on military action is abysmal. There’s a good chance we’ll be drawn in to a civil war in which there are no good guys—the brutal, callous regime versus an opposition chockfull of Islamists—and from which there is no easy exit. The president’s “red line” rhetoric and fumbling explanations and unclear goals have done little to assuage the sense that we’re about to act because we’ve boxed ourselves in, rather than out of legitimate national security interests. We may not even be able to prove that President Bashar al-Assad ordered the Aug. 21 chemical attack that killed at least 100 Syrians near Damascus, though there’s little doubt that someone in his regime was behind it. Most importantly, we have no idea what happens after the bombs drop. And yet I’ve been—because of a project I’m working on for another organization—thinking a lot lately about Kristallnacht, the national pogrom the Nazis unleashed on Jews throughout the Reich in November 1938. The “Night of Broken Glass” marked, in some sense, the beginning of the Holocaust, the first time the Nazis incarcerated large number of Jews (30,000, in fact) simply for being Jews. Hundreds died, both immediately and later in prison camps. Thousands more were eventually forced to leave their homes. The Nazi government then blamed the Jews themselves for the violence, and fined them the equivalent of $400 million. Jews whose homes and shops had been vandalized saw their insurance payouts confiscated by the government. It’s always dangerous to compare modern events to Nazi Germany—Godwin’s law, etc.—and I don’t mean to do that here. Certainly the use of chemical weapons in Syria, as detestable as it is, doesn’t hold a candle to the evil of the Holocaust. But the significance, to my mind, is this: Kristallnacht was one of the most publicized events of its time. Everyone knew about it, but did nothing. So the Nazis forged ahead, emboldened by the world’s passivity. Yesterday I spoke with woman who lived through Kristallnacht as a child. She remembers the Nazis’ brown boots, remembers them kicking open the door to her family’s home and throwing their furniture out the window. Her father was taken to a concentration camp. Her mother—who was at the time in the hospital giving birth—escaped by jumping out of the window, and had to come back for her baby later. I asked her what she thought the world had learned from Kristallnacht. “The lessons are that we have to be aware of what’s going on around us,” she replied, “and not have our heads in the sand—not to let it happen again. But it’s happening all around us. I don’t think we’ve learned a lesson.” Darfur. The Sudan. Rwanda. Egypt. North Korea. Iraq. Saudi Arabia. Uganda. Afghanistan. We live in a world full of tragedy and depravity. We can’t fix everything. Nor can we be the world’s humanitarian police, especially if the world doesn’t us to be. I know that. And I also know that Syria 2013 is not Germany 1938. But I’m wondering if we’ve taken to heart the lessons of Iraq too much and Kristallnacht too little. I’m wondering at what point are we—the most powerful nation on earth, one which imagines itself to be a force for good in the world—compelled to act. When is sitting on the sidelines and shaking our heads at the horrors we see on television no longer enough? If there’s no recompense for massacre—massacre with weapons the global community has sought to abolish for a century, no less—in the midst of a civil war that has claimed hundreds of thousands of lives with no end in sight, no price to pay for gassing one’s own citizens, if we’re willing to turn our heads because intervention is too damned hard, because we care but not that much, what does that say about our humanity? Our empathy? Our resolve? There are, unfortunately, just as many consequences for inaction as there are for action. At Kristallnacht the world saw a horror in progress and shrugged. The horror spread. We are right now witnessing a horror in Syria, albeit not yet on the same scale, but a horror that is likely to get much worse before it gets better. What will our reaction be? How will history judge us? That’s not to say I’m pro-war, not really. The risks of foreign entanglement are real and costly and rather frightening. But at the same time, the moral case for intervention isn’t trifling or easily dismissed. And burying our heads in the sand, as the world did 75 years ago in Germany or even two decades ago in Rwanda, isn’t a good or acceptable option either.