I’ve been watching a lot of reruns of The Mary Tyler Moore Show recently, and boy is that program even better than I remembered. Every member of its ensemble cast deserves the iconic status they all now enjoy. And in defiance of the idea that straight guys can only identify within their own gender, the reruns have reminded me how much my personality and worldview were shaped by the character of Rhoda Morgenstern. To this day, I can quote from the episode in which Rhoda has to be smuggled into the surprise party Lou Grant is determined to not have:

"I think we’ve found a theme for this party," Rhoda announces. "Hatred."

With Ida Morgenstern’s darling daughter freshly in my mind, it was kismet that rumors bubbled up this week about Valerie Harper potentially competing in the upcoming season of Dancing With the Stars. Right now, neither Harper’s representatives nor the show’s are confirming anything – logically enough, given that the official announcement of the Season 17 lineup isn’t due until next Wednesday. But that didn’t stop CNN from hauling out a health expert to fret that the program’s punishing regimen could be extremely dangerous to a brain-cancer sufferer like Harper, and that she should be consulting very carefully with her doctors to assess the specific risks.

At the risk of sounding flippant, WHAT’S THE WORST THAT COULD HAPPEN AT THIS POINT? Six months ago, Harper was given three months to live. Her doctors now have hope that she might hang on until Christmas.  She of all people should be allowed to carpe the fuck out of that diem. She should go on Splash if she feels like it. Or Fear Factor: Sarin Gas Edition. Or Juggling Chainsaws With the Stars. Whatever floats her boat. When you’re living on borrowed time, you get to live however you want to.

We have entered the era of the professional concern troll – the opportunistic buttinsky who’s all over the media, warning our public figures of pitfalls they’ve probably already foreseen. And wouldn’t you know it, the recipient of that unsolicited advice is usually a woman. One of the most nauseating things I heard all month was Morning Joe’s Mika Brzezinski declaring that anybody who watched the VMAs had abetted the “undoing” of Miley Cyrus – as if that performance were something that had been done to Cyrus, not by her.

(For reference: Brzezinski is the same dingbat who admitted, on air and to his face, that she had never heard of Russell Brand in her life. Suffice it to say that she got the response she deserved,  which was essentially a reminder that sitting next to Joe Scarborough does not make one an estimable thinker automatically and by default.)

Do we really think that Harper hadn’t weighed all the angles before signing on with DWTS (if that is indeed what she’s done)? Maybe she’s always wanted to be on the show, and figures she has nothing to lose. Maybe she just wants another paycheck to pass along to her heirs. It’s honestly none of our business. Certainly, her recent public appearances indicate that, whatever else Leptomeningeal Carcinomatosis may be doing to her, it hasn’t rolled back her lucidity and reasoning skills. (I would explain precisely why this is, but my extensive medical training in the topography of the human brain isn’t something I go waving around at parties.)

The worst thing about having pop-med pundits second-guess Harper’s decisions is that it encourages the rest of us to follow suit. She shouldn’t oughta be doing that, the civilian kibitzers in the DWTS audience will pronounce, as they ponder whether to sign up for a healthcare exchange or buy a big stack of lottery tickets. 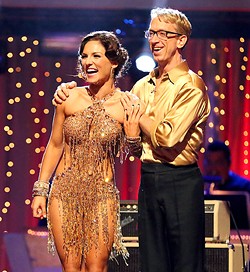 Now THIS is a risk.

I think we’ve found a theme for this party: arrogance. Who are we to tell Harper what to do with her skull? It used to strike me as crazy when some paralyzed football player would declare that, were he granted the ability to walk again, he’d be right back on the field. But now I get it. If you love doing something, and you’re willing to accept the potential consequences, why shy away from it? What’s worse – taking a risk, or living a life of misery because you’re too afraid to go outside?

So I’ll be rooting for Harper if she does indeed line up on DWTS. And I won’t let it bother me if some Jimmy the Ghoul out in Vegas starts taking bets as to how many weeks she’ll get through. Even that prospect is preferable to the idea of Rhoda Morgenstern, in the twilight of her days, having an entire nation pointing out the supposed gaps in her judgment.

Personally, I hope she twerks it up like mad, ’cause that’ll really make Brzezinski’s head explode.

Days without a response from the publication that plagiarized from me and won’t come clean: 75.