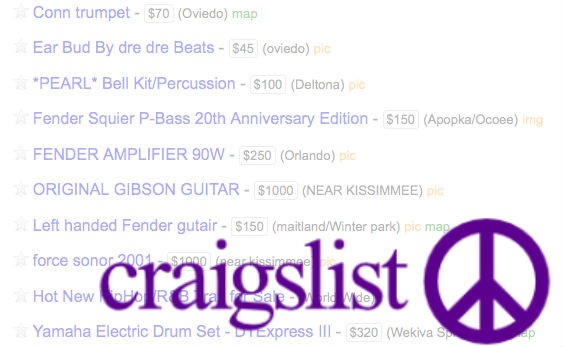 Years ago, I had a friend who was obsessed with Craigslist. Not for the absurd or campy missed connections. Not for rental homes. Not for the free stuff. Like most musicians I know, he was so heavily involved in Craigslist exclusively for the By owner - musical instruments category. This was like having access to hundreds of curbs all at once, a land he showed me that was filled with intriguing music finds typically posted by folks living outside the city, down Central Florida's country roads, usually in homes where the instrument proffered in the ad was in good company, nestled between Orange speakers and cast-off Wurlies, vintage guitar models and, frankly, shit that should be valued a lot more, but it takes a savvy Craigslist skimmer to recognize the goods.

I assumed that most of these "owners" had to be naive for my friend to get lucky so often, but the more road trips I went along for the ride on, the more often I'd be party to an encounter with a knowledgeable, capable musician, who was basically paying forward the treasured items from his collection to a younger fold of eager musicians who look to Craigslist the way a teenage girl looks to Mall at Millenia. So many accessories.

Even though I'm not a musician, I still click over to Craigslist when a musician friend posts in anguish, lamenting an item they want but can't afford. "THIS!!!" And that's what I was doing this morning, when I came across some silly stuff:

Original, hand-drawn with a bic pen on printing paper, picture of Boba Fett from the saga Star Wars is sure to please.

Comes with: American Jazz Bass, strap, and strings. Will not separate.

And then my hunt took me into TNT-type-DRAMA like this thread on an "extremely rare jackson sx guitar" that jumped in value over the course of the heated conversation from $250 to $89 to $1500, currently. Check out these CL baddies:

Original post: got this guitar in an estate sale. It has jackson tuners,a jackson neckplate,select swampash body,select mapel neck,p 90 pups,says custom hand made vintage series. I can't find any info on this guitar. it looks and plays like a pro axe! Does not say where it was made not sure if its old or new. Condition is a 9 out of 10 I'm asking $250 or possible trades. Text to 321 297 1596 if interested thanks!

Then it gets confusing:

First responder: Its not a Jackson guitar. It's a SX Hawk... They sell for $89 brand new http://www.rondomusic.com/hawkmnmh2ts.html

A good Samaritan comes to the original poster's defense ... kinda:

Second responder: I am not sure why you thought that was a Hawk SX, but other than having P90s and a Strat shape body, those guitars look nothing alike. The headstock was not shaped the same. The Hawk has standard dot inlays, not offset. The tuners on his do in fact say Jackson.

I do not know anything else about that guitar or the person selling it (And really hate when people do not show the front of the headstock,) but I know that link you posted to the Hawk guitar, is by zero means, the same guitar the person has for sale.

Its good to be on the lookout, and if someone is really trying to pull something, point it out. However, at least pay attention and be positive before you call someone out like that.

So, I posted a friendly warning that his guitar was not a Jackson sx, but a sx brand. I posted a link where you can buy it for $89 new.

He just emailed me this! (I am censoring some language)

Thanks for the info as&hole. You could have just emailed me what you think it is you stupid fu@k. Then why jackson parts ??? Dave lol!

And the good Samaritans keep on gooding:

He did not show the front of the headstock, but I know for 100% fact that it is not a Jackson guitar (the eys and neck plate appear to be-easily changed after sanding off SX). The guy even said in the ad "vintage series and sx"... That shape headstock s on older versions of the SX Hawk as well...

P.s. I'm only trying to keep someone from getting ripped off... Show the headstock Jackson logo and I'll shut up...

Also 5 minutes of research and i found SX strat with offset fret markers and the same headstock.. Look at the little round emblem on the back

Original poster returns and he apparently knows who his declaimers are?

Well some dipshit posted that the jackson sx is an sx hawk lol! Well nowhere on the guitar says hawk at all lol. I'm not saying it is a jackson I'm just saying that it has jackson tuners and neckplate. The guitar is top of the line and if it were an sx hawk for $89 than more power to that company to sell guitars for this type of quality for $89 which is total b.s. don't worry I know who posted this and is just being a dick! The guitar is still for sale or trade thanks for looking and sorry for this kind of adult imature b.s.

I did simple research and looked at other ads that this guy has up and in one of the pics you can see the "jackson... errrr SX" in the background with NO NECK on it!!!!

link to other ad below...

And then late-night THREATS ARE ISSUED:

Then if you know what it was then why not email me what it is? You post my name WTF I will report this to cl your out of line! You can't take it so you post my name on cl? Ill tell you what why don't we settle this boy to man?

There's more name-calling, but I will spare you. The guitar jumps in value to $1,000 and then the original poster comes back with this:

Hey to the CL police...thanks for all the controversy! Not only did I find out what my guitar was I actually traded it today and not for your childish bullshit it would have never happened lol thanks again you fucking douchebag lol!!

And by now it's impossible to tell who is who among his nemeses, but stay blessed:

I'm glad that you sold it. It was my intent to help you from the beginning by telling you what is was and how much it was worth, but then you had to email me and make personal threats. Not Cool. Making threats to someone when you do not know who they are is not very nice or smart. I on the other hand know exactly who you are J*mmy. Say hi to L*sa and lil J*mmy for me, oh and how's your wife's transplants holding up?

Next time show the front of the headstock and don't pretend like you have no idea if it is a Jackson or not, because you know all about these guitars and you have a bunch of high end Jacksons in your living room.

Stay blessed, sell gear and live a good life without fear of whats around your corner!

The original poster left this final message at 1:18 a.m. today with this:

This guy wouldn't know a threat if it bitch slapped him in the face wich is what he needs! I gues in his diluted mind that is a threat go finish banging your sister and get off the meth and we can settle this man to man? Only I dipshit like you would even post shit about someones family on cl not to mentionyou have knowidea the hell my familys been through !!! So stop trying to act like the victom and man up? You know who I am,well bring it???

So, I guess the moral is that no matter how many positive experiences you've had with Craigslist, always use caution, because you have knowidea until you meet up just who you're dealing with. Good luck on your questing, musicians!