Yo’ mama is so invisible: “Saturday Night Live”’s sister problem 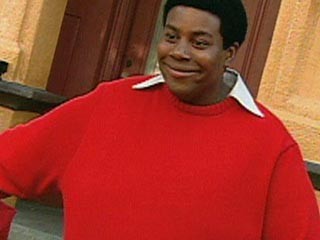 The model of readiness.

Time for a reader poll: Who’s your favorite black woman on the new Saturday Night Live?

Trick question, of course. There isn’t one. Hasn’t been one since Maya Rudolph left in 2007. And if you want to talk 100 percent, immediately identifiable, can’t-get-a-taxicab black, you have to go back to Ellen Cleghorne, EIGHTEEN FUCKING YEARS AGO.

Instead, there’s a freshman class of six eager young white folks; by midseason, you may even have learned to tell some of them apart. (For the record, my money is on The Guy Who Does Philip Seymour Hoffman to be the breakout star, provided he can first lure the other five to an isolated country mansion and murder them all one by one, Agatha Christie style.)

If you didn’t know better, you might think there’s some sort of bias going on here. But Kenan Thomspon, one of the show’s two current African-American performers, says the problem lies elsewhere: There just isn’t a single black female in the entire country who meets the show’s standards.

"It's just a tough part of the business," Thompson told TV Guide. "Like in auditions, they just never find ones that are ready."

Per Alyssa Rosenberg at Think Progress, Thompson’s comment drew the support of a self-professed industry casting director who blogs under the name Miss Jean  and tweets as @HelloMocha. Not only did Miss Jean (who appears to be African-American herself) buttress the idea that many black women are “not ready” for a platform like SNL, she added a suggestion of basic unprofessionalism:

“I was begging for Black women Comics to come out the woodworks & begging them to reply to emails while watching them Tweet all f*cking day,” she, um, Tweeted.

(Maybe Lorne Michaels should write to Jon Stewart and ask him how he manages to put up with Jessica Williams.)

Now, I’m not a casting director, so I can’t speak to the reality of Miss Jean’s experience. But a cold chill runs down my spine whenever I hear it decreed that members of a certain minority group are “not ready” for success because of some negative attribute(s) they all allegedly share. And as a regular viewer of SNL, I can state one thing for certain: Kenan Thompson is in no position to decide who deserves to be on TV.

Every week for a decade now, Thompson has been proving that’s not ready to be not ready for prime time. Oh, he can time a joke okay; that’s about the extent of his abilities. But his recurring “What’s Up With That” is the most excruciatingly unwatchable bit on the tube, and as both an impressionist and a creator of characters, he merely cycles through a handful of stereotypical representations, whether or not they actually pertain to the subject at hand. Given the rich opportunity to portray someone like Congressional chaplain Barry Black, he doesn’t bother to replicate Black’s deep, hyper-distinguished tones; he merely reaches into his shallow trick bag of stock voices and hauls out that one that he feels corresponds most closely to “black preacher,” hoping his audience won’t know the difference (or, worse, doesn’t care about accuracy any more than he does).

Thompson’s thoroughly unjustified longevity is symptomatic of a problem at SNL that few perceive. While it’s both true and widely recognized that the show has race difficulties – this is, after all, the program that didn’t know what to do with Chris Rock – the corollary is that Michaels has never known which black faces to prioritize, either. For seven years, he was relentless in his promotion of the absolutely incompetent Tracy Morgan; for the last two of those years, the infinitely superior Dean Edwards went ignored. Or just disrespected: Edwards did a mean Michael Jackson, only to have the role taken away from him and given to – wait for it – Amy Poehler, who despite her considerable other skills, has always sucked out loud as a mimic.

Don't you even try it, Taran Killam.

So no, this is not a crew I’m going to take seriously when they tell me they don’t have a single option for lampooning the First Lady of the United States unless somebody wears a dress. And at this late date, it’s kind of pathetic that the SNL race debate mostly concerns the readiness of black performers to portray black characters; in 2013, we should be celebrating the black cast members’ ability to play anybody and everybody.

In that respect, the program’s also-notorious sexism is shaking itself out more quickly. The untold story of the post-Bill Hader era is that most of its standard-bearers are women -- and part of the reason for that is that some of the more recent hires are being allowed to flex their muscles beyond the representational tropes for which they were ostensibly hired (Kate McKinnon: famous lesbians; Aidy Bryant: chunky losers). Would that some women of color were around to enjoy the renaissance. I guess I’ll just have to look for them on Twitter to find out what’s up with that.

Days without a response from the publication that plagiarized from me and won’t come clean: 122.