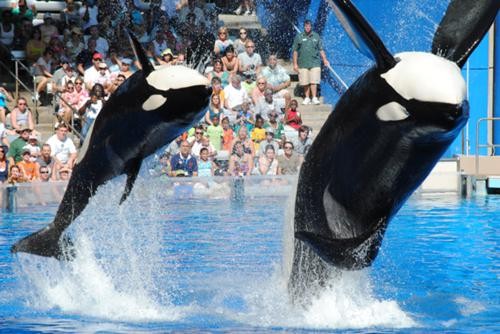 Editor's note: Recently, you may have heard, CNN decided to air the controversial documentary Blackfish, which takes aim at SeaWorld for both its role in the 2010 trainer Dawn Brancheau and the park's decision to keep orca whales – intelligent animals that some say should not be kept in captivity at all – in its parks for fun an profit. We received an op-ed from recent UCF grad Jason Douglas Kelly, who spent two and a half years working at SeaWorld as a research intern. He says that CNN violated journalistic principles in airing the film. His op-ed is below. For more information on the film, read our Aug. 7 story on Blackfish.

CNN’s broadcast of “Blackfish” a breach of ethics

Long after the blaring rock music of the Shamu night show subsides and the roaring crowd flees the stadium for the parking lot, a squad of custodians files into the 6,000-seat structure to sweep up the popcorn peppering its steps and to hose off the beer and saltwater that coat its sticky stands.

Once the houselights shut off and the park Muzak dims, Shamu Stadium morphs into the most tranquil setting in all of Orlando. With moonlight beaming bright, I sit poolside with a waterproof Palm Pilot in hand to record the behavior of eight giant predators floating in slumber. A nearby whale exhales. Her blowhole fires a column of vapor carried by the breeze into my face. Searching for a playmate, one of the youngsters props his jaw against the pool ledge. He squirts me with icy saltwater hoping I’ll indulge in his midnight mischief.

I leave the circuit of backstage pools for a restroom break. Before dashing up the stadium steps, I peer through a large acrylic panel into the deep, dark waters of the show pool. Tilikum swims by as he traces the half-circle pool’s perimeter in a counterclockwise pattern. How eerie it is to ponder the two human deaths linked to the bus-sized mammoth swimming before me, one of which occurred four pools away a decade prior.

Will it happen again, I wonder. A month later, it did at a facility in Spain, and once more two months thereafter at SeaWorld. Much has changed in the three and a half years since the gruesome death of a veteran SeaWorld trainer. The day of “the incident,” as the company refers to it, forever redefined SeaWorld. In many ways, Feb. 24, 2010 was SeaWorld’s 9/11. Things will never be the same.

Shamu Stadium is now guarded like a fortress. There are no more research interns scattered about the seven-million-gallon aquatic complex; it’s too great of a liability. Gone are the days when whales thrust their wetsuit-clad trainers two stories into the sky. Today, some trainers are no longer permitted to even walk within splashing distance of certain pool walls.

But the most noticeable change is the absence of Dawn Brancheau – a 40-year-old bubbly blonde with a Chicagoan accent, petite in stature but larger than life. A strong, spiritual woman whom her colleagues adored and who inspired millions of park guests through her bond with the whales she loved with every ounce of her being. Each time she opened up the stadium’s backstage gate to let me in, she welcomed me with such warmth and attention that I felt more like a SeaWorld executive than an intern.

Though she is gone, Dawn’s memory lives on. But a new sensationalistic documentary titled “Blackfish” shamefully exploits her death and hijacks her legacy to propel a not-so-hidden agenda.

The film, albeit compelling, is a work of advocacy, not of journalism. And this malicious propaganda will leap from the silver screen to your television set Thursday when CNN debuts the film on its flagship network.

In so doing, CNN will violate a laundry list of journalistic principles hallowed by the Society of Professional Journalists Code of Ethics – the moral compass that guides American reporting.

Journalists are ethically obligated to seek truth and report it, to minimize harm, to act independently and to be accountable. With its distortion of facts, its use of undercover footage, its failure to disclose conflicts of interest and its pandering to lurid curiosity, the film violates each of the four tenants that constitutes journalism’s ethics code.

Slapping the CNN logo on “Blackfish” cloaks the film with a veil of neutrality, granting it the finest grade of ethos money can buy, but not without chipping away at CNN’s own credibility.

The documentary delves deep into SeaWorld’s history, but it makes no mention of the company’s commitment to conservation. In the last five decades, SeaWorld has pioneered the concept of corporate citizenship by pumping millions of dollars into its rescue program, which has saved more than 22,000 animals.

Through “Blackfish,” filmmaker Gabriela Cowperthwaite implies that SeaWorld neglects the animals in its care, but I challenge her to argue that to the Aquarium department employee who clocks in before dawn for little more than minimum wage to help care for Grandma, a rescued endangered sea turtle who arrived at SeaWorld with a crushed shell and a missing lower jaw. I dare her to argue that to the Animal Care department employee dispatched to a rescue who would dry the sweat from her brow and the tears slipping down her cheeks were it not for an orphaned dolphin calf dying in her arms.

Reexamining the ethics of zoologically displaying such charismatic megafauna can be a healthy national conversation to have, but for it to be constructive, it must be a reasoned dialogue – not a spiteful monologue. And the discussion must be compassionate toward the still tender emotions of Dawn’s family, friends and colleagues who remain spiritually sore from their agonizing loss.

Jason Kelly, 24, recently graduated from the University of Central Florida with bachelor’s degrees in journalism and psychology. He spent two and a half years at SeaWorld Orlando as a killer-whale behavioral research intern, conservation educator and VIP tour guide.

UPDATE: This piece also ran in the Sentinel's "New Voices" column on Nov. 2.