November 15, 2013 at 11:57 AM
comment
When you get a corporate email with the subject line, "We're not smoking crack," of course you're going to open it. And we did. And this is what we got:

In case you didn't get it right away, that's a reference to Toronto Mayor Rob Ford, who's been in the news about every other day lately for smoking crack/being a blackout drunk/maybe hiring prostitutes/definitely using foul language/having a milk moustache (see photo below, which was actually published by the Canadian Press. Hey, it's Movember, can't a guy get a break?)

Spirit Airlines, which is based in Miramar, says that if you book today, you can fly from Orlando to Fort Lauderdale for $29.90. The Toronto Sun points out that the "cheeky American budget airline" is known for its controversial ad campaigns, like the one that made fun of disgraced NYC mayoral candidate Anthony Weiner ("Carlos Danger: The Weiner Rises Again"): 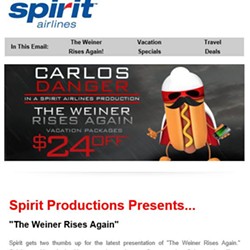 And then there was the M.I.L.F. (Many Islands Low Fares) ad campaign.

If Rob Ford keeps it up, maybe Spirit can come up with a "If you think you can find lower fares anywhere else, you can suck our dick" campaign. Or worse.

Also, while we're thinking about Mayor Rob Ford: Did you know that he's the same age as actor Paul Rudd?

Smokes crack, but only when he's really drunk.