What do the foxes say? Rating the chick talk in movies 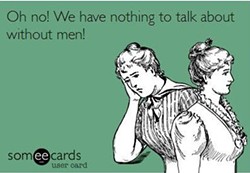 Imagine for a minute that you could spend an entire day watching movies on TV and see only films that had earned a feminist’s seal of approval. Unless you’re Daniel Tosh, that would be pretty sweet, right?

Well, it’s happening tomorrow, Nov. 17, in Sweden, as the country’s Viasat Film channel shows its support for a national ratings initiative designed to improve the portrayal of women in cinema.

Now, Sweden has long been an incubator of good ideas, from ready-to-assemble furniture to au pairs who will LET YOU DO ALMOST ANYTHING. But in supporting the Bechdel Test for movies – which, per the Guardian, has already been adopted by four of the country’s theaters -- I think the land of meatballs and ABBA is really on to something. It’s just that I’m not quite sure what.

The Bechdel Test, the Guardian explains, was first proposed by U.S. cartoonist Alison Bechdel in 1985, in her strip Dykes to Watch Out For. (Pro-woman ideas, you may have noticed, tend to travel the globe like wildfire, as long as your conception of wildfire has it moving slightly slower than John Goodman’s metabolism.) The test is simple, comprised of three key questions:

If you just asked yourself “What else is there to talk about?,” then you’re clearly part of the reason the test was invented. But in a weird way, you also have a point.

There’s an entire website  that shows how problematic those rules can be. It lists a number of films and shows how readers have rated them according to the Bechdel Test. And there appears to be quite a bit of controversy as to what constitutes a conversation, let alone what makes one of them “about men.”

Let’s look at the entry for Man of Steel, which includes a pretty hilarious rundown of two supposedly qualifying “conversations”:

"While we're at it, what did you think of New Coke?"

The first one is when Jenny (who isn't named at this point in the movie, but is named later) tells Lois "You have got to come see this" regarding the news of the alien invasion being telecast.

The second is when Faora tells Lois "The atmosphere on our ship is different from Earth. This apparatus will help you breathe in that atmosphere"

Certain site users have balked that those are not “conversations,” since in each instance a woman merely tells Lois Lane something and Lois does not respond. Others say this is not the case: “Lois ASKS Jenny if the printer is out of toner. Jenny RESPONDS that Lois needs to come see the news report about aliens.”

Meanwhile, a different question goes unuttered: For the love of sweet baby Jesus and all that is sacred, are these really the bones we have to fight over?

“Are we out of toner?” “Here’s how to breathe outside Earth’s atmosphere?” Somehow, I doubt this is the sort of scintillating, mutually edifying, sisterhood-furthering discourse Bechdel had in mind.

Maybe I just have a problem with rules that don’t accomplish enough. I may be one of the few liberals in America who thought the only problem with Rand Paul’s filibuster was that its scope was too narrow. As far as I could tell, all he was seeking was reassurance that, when the United States government arbitrarily declares one of its citizens an enemy combatant, it has to wait until he goes on vacation to murder him without trial. Meanwhile, I was looking for a little more clarification of that “enemy combatant” part. Just so I could know where I myself stood, you understand.

Similarly, I’m not thrilled with “Here’s your spacesuit, bitch” counting as a healthy exchange of views. On the other hand, I’m even more concerned about that “a subject other than men” stipulation. Does “Come look at this alien invasion” count because some of those aliens might be women? (One, as it turned out?) More to the point, in a culture that is ruled by the ideas and desires of men, what conversation is not “about” them in some more or less illustratable way?

It’s the flipside of the joke I made earlier. Some men are flabbergasted to learn that, when women get together, they sometimes enjoy tossing around subjects that don’t expressly concern us guys. It’s the “expressly” that’s the sticking point. How seriously can one discuss the world we men have made without in some way referencing our role in it? How can any line of talk really qualify as feminist if it doesn’t mention what it’s up against?

Under the Bechdel rule, a movie would get a failing grade if it showed Gloria Steinem, Betty Friedan and Andrea Dworkin sitting around and talking for 90 minutes about what sticks in their craw. It would be one of the most feminist movies ever made, but it would still flunk the test. What if the same standard were applied to movies about the black experience, or gay life? Can a movie really explore what it means to be African-American or queer while struggling to satisfy an arbitrary rule that at least one conversation doesn’t involve the oppressor? Unless we’re supposed to console ourselves that the rule merely calls for one such tête-à-tête – which, again, is pretty depressing when it comes to lowered expectations.

"On the other hand, who CARES what you think?"

So as much as I support Sweden’s Bechdel initiative in theory, I’m wondering how much it can really accomplish – and if, in some ways, it might not do more harm than good.  I’m not prepared to throw out The Miracle Worker as a feminist tract because some persnickety Swede doesn’t think “Wa-wa” qualifies as chat. And I can almost see the posters for that Sex and the City threequel: “They don’t just talk about men – they also talk about shoes!”

The trick, I think, is to not impose rules on art that require it to depict society as better than it really is. The trick is to make society better so art has a wider vista of perspectives to depict. If we want to hear women talk about something other than men, we can’t just tell them that the subject is off the table. We have to get the hell out of their way so they can have something else to talk about.

Days without a response from the publication that plagiarized from me and won’t come clean: 152.