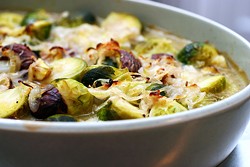 Welcome to Salivation Army's first-ever Thanksgiving countdown! We're full of good ideas for your turkey-day table, from easy appetizers to make-ahead desserts to beer and wine pairings to bird-cooking methods and more, and we'll be sharing every day until the big Thursday. Today: eight unexpected veggie side dishes to liven up the Thanksgiving menu.

Mashed potatoes and gravy; stuffing; something with yams: Some sides are sacrosanct. But there's always room for a wild card, and it doesn't have to involve canned cream-of-mushroom soup. Brussels sprouts are trendy right now (second only to kale, perhaps), but they deserve it; their almost-bitter sharpness stands up firmly to all the butter that Thanksgiving cooking drowns you in (and you've gotta have something green on the table, if only for color balance). This (vegan-friendly) recipe from The Kitchn for smoky, lemony shredded Brussels sprouts will be on my own menu this year.

However, Brussels sprouts take pretty well to butter too: Deb Perelman's recipe for Brussels sprouts and chestnuts in brown butter over at Smitten Kitchen is the kind of fancy holiday dish that calls for half a stick of butter, but it's worth it. (Pro tip: Don't make yourself crazy roasting and peeling whole fresh chestnuts; buy  a vacuum pack or jar of shelled ones. If you're dousing it all in butter and chicken stock, the difference in taste will be minimal, and unless you have asbestos fingers, you'll be much happier.)

Moving away from the sprouts, Mollie Katzen's roasted beets and carrots with a grapefruit glaze are deep and earthy and colorful, and the tart citrus glaze cuts right through your more decadent dishes. Portland chef Trent Pierce shares his recipe for miso-creamed lacinato kale, a twist on creamed spinach, over at Food52, and it looks like an umami bomb. (If you have a hard time finding it in the supermarket, you can usually get lacinato kale at the Local Roots stall at East End Market. Blonde or white miso is a great thing to keep on hand: full of probiotics, basically never spoils, and a tub runs about $5 at any Asian supermarket.) Booze, heavy cream and butter? It ain't health food, kids.

On the next page: roasted cauliflower, holiday-classic pomegranate salad, and you didn't think you were getting out of this without Martha Stewart, did you? 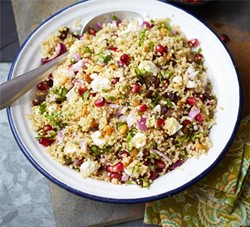 A grain salad is a good place to stuff in a lot of vegetables without anyone objecting, and this simple recipe for herby quinoa, feta and pomegranate salad from the BBC's Good Food site pops with bright colors and flavors: mint, parsley, cilantro ("coriander"), and ruby pomegranate arils. Substitute barley or farro or even couscous if you're not a fan of the quinoa, and don't sweat the measurements, which are by weight in grams instead of American-style cups and tablespoons; a grain salad is not an exact science. Just eyeball it. A tip for getting pomegranate kernels out of the skin without stains or laborious one-by-one picking? Cut open the fruit and loosen the membranes under the surface in a big bowl of water; the arils will float to the surface.

When roasted, cauliflower turns crunchy-tender, plus it's seasonal and super-easy: just throw a cookie sheet of seasoned florets in the oven with the turkey. (You barely need a recipe, but this is a good basic guide; just add some lemon juice with the oil and sub in your own spice preference.) Roasted cauliflower takes well to almost any spice mixture, but two I enjoy could be called Indian (or Indian-ish); toss the florets with curry powder and cumin seeds before roasting, and Sicilian (or Sicilian-ish); toss with raisins, green olives and pine nuts after roasting). Whatever spice you go with, just shower the cauliflower with chopped cilantro or Italian parsley before serving. You don't want the whole table to be monotone roasty brown.

Last but never least, Martha Stewart may be in the doghouse this week for her allegedly "gross" food Instagrams (never mind the Philistines, M.Stew; we gotcha back), but this ancient recipe of hers for sauteed leeks and green apples still holds up. It's one of the first things I ever cooked, and appropriately simple (in fact, if you have a kid who wants to help out, this is a great starter dish); and you just can't go wrong with leeks and butter, right?