November 20, 2013 at 4:48 PM
comment
For as long as I can remember, my favorite thing about Walt Disney World has been that there’s always something new — an attraction, a character, a restaurant, a special event, etc. Maybe this is why I’ve been to Walt Disney World an obnoxious number of times and Sea World zero times, save for a 5K I ran there in 2011.

I’m 28, and my Disney Parks obsession continues to know no bounds. When I have children, I’ll forget I’m supposed to be the adult in the relationship when we’re at WDW. I may or may not visit the Bibbidi Bobbidi Boutique for myself more than my hypothetical future daughter (or son) while assuring them it’s really for them. I’m prepared for this sad yet inevitable reality.

But as I’ve gotten older, some of my most-beloved Disney attractions have shut down to make room for all the new stuff. I know growth is necessary, and like I said, the ever-changing nature of the parks is the best part, but it doesn’t make letting go of the defunct easy. Here are the top five things I miss most about the WDW I knew in my childhood. All of them, incidentally, happen to be Magic Kingdom attractions:

This attraction has since been turned into Stitch’s Great Escape!, which isn’t lame, per se, because Stitch is adorable and has a charmingly eccentric disposition and vocabulary (not to mention my fiancé does a great impression of his voice), but before Lilo & Stitch was born, there was an attraction called Alien Encounter. It scared the crap out of me, but I’m also the same kid who was watching the Child’s Play films at age 3 and not learning my lesson after constant nightmares, so naturally my masochistic self was all about it. The gist was that you were on some kind of space mission with a cute little alien named Skippy. Then, as you’d suspect, all hell breaks loose: Skippy’s antithesis (I like to think it was his mother-in-law) gets aboard your ship, spits at you, makes a lot of loud noises and eventually peaces out. I think it scared my mom more than me, which made it extra fun.

Fun Fact: Alien Encounter was originally going to be named Nostromo, after the ship in the film Alien.

In college, my editing professor had us write a headline for the story about Mr. Toad’s Wild Ride closing. Someone who wasn’t me totally nailed it with, “Mr. Toad Croaks.” I think I wrote something really stupid like, “Mr. Toad Hops Away.” What kind of nonsense?

One of Magic Kingdom’s originals, Mr. Toad’s Wild Ride was based on the “The Wind in the Willows” segment of The Adventures of Ichabod and Mr. Toad, an old Disney animated feature no one saw, like The Black Cauldron or Song of the South (without the blatant racism).

In one part, the ride takes you through “hell,” which terrified my then-3-year-old niece (oddly enough, she handled The Haunted Mansion fine). Maybe that’s why The Many Adventures of Winnie the Pooh took over for Mr. Toad. Fluffier animals and lack of Satan = win for the children.

Fun Fact: My niece is almost 22, which makes me feel very old.

The Skyway was another Magic Kingdom original. It consisted of gondola cabins suspended from cables that would take you from Fantasyland to Tomorrowland and vice versa. I’m not a fan of being suspended from a cable (or anything, really), so I didn’t enjoy riding this, but there’s just something missing about WDW when I go to Magic Kingdom and don’t see those cabins traveling back and forth between fairy tales and the future. 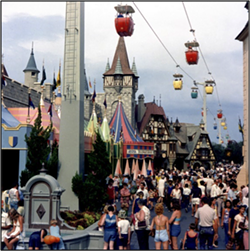 I’ve always been kind of afraid of flying, thanks to Hollywood convincing me that plane crashes are super common and the most terrifying way to die (I’m looking at you, Final Destination), so a ride that took me through the history of aviation and put me on a grounded-yet-convincing-enough “airplane” was a pretty great balance. Now I have to settle for Peter Pan’s Flight, or Soarin’ at Epcot. Both awesome rides and, to be honest, more fun than Delta Dreamflight, but neither is worth their usual hour-plus wait when you’ve been on them dozens of times already. Delta Dreamflight was the People Mover version of these rides with no wait and not-to-be-underappreciated-in-100-degree-heat-with-120-percent-humidity air conditioning, and I miss it for that alone.

I shouldn’t technically include this, because everything I remember about it boils down to three things:

It feels blasphemous not to include this on my list since it was also one of the OG attractions and has a big place in park fans’ hearts (like, there’s a freaking fan site).

Fun Fact: Some of the water from the original lagoon was poured into Ariel’s grotto last year in a ceremony to mark the opening of Under the Sea ~ Journey of the Little Mermaid, over the former location of 20,000 Leagues 18 years after it closed.

I’ll add The Timekeeper as an honorable mention, because the robot host was voiced by Robin Williams, whom I’ll always love despite his current questionable career decisions.

Which former WDW attractions do you miss most? Which were good calls to ditch?

Related: Our top 15 current Disney World attractions not to skip (even if you can’t skip the line)