Social media reactions to the most recent arrest of George Zimmerman.

Social media reacts to the most recent arrest of George Zimmerman

Two days ago, George Zimmerman was arrested during a domestic violence dispute with his girlfriend, Samantha Scheibe. In the 911 call (which you can listen to below), Scheibe says Zimmerman pointed a shotgun at her face. This incident came just weeks after police announced that they would not charge Zimmerman with domestic violence in another case, this one involving ex-wife Shellie, because Zimmerman had destroyed the iPad on which Shellie allegedly had video of Zimmerman behaving badly.

Social media erupted with Tweets and Facebook posts about the Zimmerman case. Here are a few we've gathered. 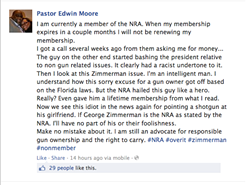 And finally, the most recent Tweets of Zimmerman's brother, Robert Zimmerman, who is once again coming to his brother's defense.