Here's a story about the least interesting character 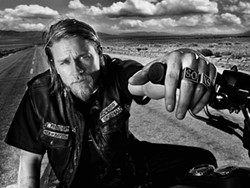 This contains major spoilers for this week's Sons of Anarchy. Avoid if you haven't seen it yet.

I have something of an irrational, yet unabashed love for Sons of Anarchy. I don't question it; it just is. It's a truly awful show that I can't really defend, yet I love it. As a kid, I had a thing about bikers. I bought into the romantic open road thing. See, I thought bikers were lovable goofballs of the open road who solved their disputes with law enforcement with truckloads of fireworks because of movies like Masters of Menace. It was always so exciting seeing a bunch of bikers on Harleys, feeling that rumble as they pass by on road trips. Especially to a kid stuck in the back of his mom's minivan, it looked like freedom.

It wasn't until later that I found out about the virulent racism, sexism and drug running. The personality type of a biker is the type that leads to things like Orlando area shootouts and to a man being beaten nearly to death in front of his family on the Upper West Side while undercover cops looked on.

Like mobsters though, it's interesting on film. It says something about our society.

But now there is this: they've killed off the character who I think was the most interesting on the show.

On Tuesday night's episode, in a convoluted prison break ruse, Jax informs Clay that the club has unanimously voted that he meet Mr. Mayhem and shoots him in the neck. It was one of those moments. "Wait, what? Did that just Happen?" The show has a lot of them. But as the episodes ends with medical examiners leaning over Clay's corpse in a pool of its own blood, there can be no mix up. Clay is dead and there will be no Ray, Clay's long lost evil twin. Ron Perlman is not in the cast any longer. Confirmed.

Jax, though, is intensely boring, just as any character whose defining trait is a control of his own rage is. He is a chess player in a checkers world, one who makes few mistakes and one who seemingly never miss a beat or an opening, which puts him so far ahead of everyone that it becomes incredibly dull. His smug face in the preview for next week's episode teases that it doesn't get any better.

Clay, for all of his many and extreme flaws, was the show's most interesting character. He was a master checkers player, which put him just far enough ahead of the others to be a good leader, but not that far.  He made mistakes, and plenty of them. His mistakes got people wronged, hurt and even killed. In his most horrifying moment, like Tony Soprano and Michael Corleone before him, he almost kills Gemma during a fight. His removed ease with violence and bravado were often scary, but it was his inability to control his rage that made him compelling. It is, in fact, what eventually gets him killed.

As the Claudius character, it's not a surprise he's gone, just that he's gone this soon before the end of the show, which still has at least another season to run. From here on out, we just have Jax, alone on his throne with no competitor, no underworld mirror to measure against.

Sons of Anarchy is a show about the least interesting character on it.

And it's not alone.

With The Hunger Games: Catching Fire coming out this Friday, I'm reminded that while I was reading the first book I thought it might be more interesting from Foxface's perspective than from Katniss's perspective. Foxface was the smart, savvy one who made it almost to the end of the Games by her cleverness, not because someone floated down medicine and food to her to help her through the roughest patches and keep her alive. In the film version, Jennifer Lawrence performs the save of a lifetime on Katniss, but Jacqueline Emerson intrigues as Foxface too, despite limited screentime.

We all know the real heroes of Harry Potter are Neville Longbottom and Professor Snape. This is indisputable.

Indiana Jones comes around by the third film, but in Raiders of the Lost Ark, Marion is far more interesting.

Angela Chase? Nah, Tino is the most intriguing character, like, ever.

Luke Skywalker? Pretty much anybody but.

How old is the problem? Say, older than The Odyssey, but maybe not as old as The Epic of Gilgamesh?

I was given conviction about this opinion while reading Ender's Game for the first time. Though it's a good book, and Ender isn't the least interesting character, I couldn't help but think that it might be a little more interesting from Bean's perspective. And then I got to Ender's Shadow, which covers roughly the same events of Ender's Game told from Bean's perspective, and found out my assumption was right.

If I pause a moment and call Ender's Shadow a fluke occurrence, an odd idea emerges: it's the developed characters that I have the most problem with. The protagonist, well, not only do we get his or her backstory, we often get their inner monologue as well. At times, The Hunger Games reads more like a Livejournal than a novel, and Order of the Phoenix is so full to the brim of Harry's teenage angst because NO ONE UNDERSTANDS HIM (except you, dear reader) that you almost experience a second puberty yourself.

But character development is supposed to be a good thing, isn't it?

Sometimes you can have too much of a good thing.

I know too much about Jax Teller. There is no mystery, only "what next?" I don't know anything about Clay Morrow's life before the club, and I know precious little about his life in the club before the pilot episode, but I can tinker with ideas in my head about his character within Sons of Anarchy's golden spaces. How did he become that man in the pilot? And I'm right no matter what Kurt Sutter says.

Maybe one of the flaws of our own character, or at least my character in this concern, is that we're all storytellers in one form or other. Good or bad, most of us at the very least want to tell someone how our day went. Loneliness is not having anyone to tell that story to. And like any storyteller, we think we know better. Our stories are better than anyone else's, especially some hack writer from Hollywood. And sometimes, maybe they really are.